Nothing is better than Opening Day at Busch Stadium. I’ve never been, and I know this. It’s actually hard saying what I would give to be able to go to an Opening Day… but since you’re reading this a mere hour or two before first pitch, I’m obviously not there yet! Maybe next year. Your goal today is simple: Watch the Cardinals beat down the Cubs. Enjoy every glimpse of every red-coated Hall of Famer you...

A Bromance We Can Get Behind

In past years it was easy to accuse the Cardinals of being almost… bland. Elder statesmen of the team like Albert Pujols and Chris Carpenter brought drive, passion, and supreme athletic ability to a strong team. What they didn’t bring? Fun! It sounds stupid, but the more you think about it, the more you realize that this clubhouse was not one that seemed like a barrel full of laughs. Older teams like the 2006 World Series... 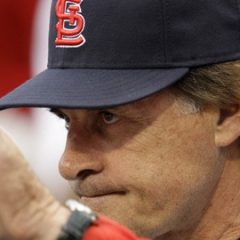 The winningest manager in Cardinals history is going out on top.

I-70 Baseball names their top 3 managers of the year in the National League, as part of the Baseball Bloggers Alliance.

Whenever we receive emails from the Cardinals beginning with the word “Bloggers,” it usually means we are being asked to do something. I’m not complaining, even if they are using me/us for free PR. This kind of PR is definitely worthy of a mention though. Last year the Cardinals put on a “Stand for Stan” campaign to help Stan Musial receive a Presidential Medal of Freedom, the highest honor a civilian can...