I thought of sharing this story shortly after I experienced it. I wasn’t sure I wanted to. After watching MLB’s Field Of Dreams game on August 12, I decided it was worth posting. 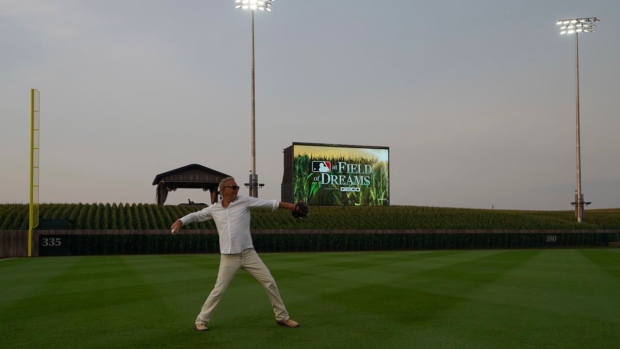 Everyone likes to quote Field of Dreams. They especially like to quote the conversation between Joe Jackson and Ray Kinsella. “Is this heaven,” Joe asks. “No, it’s Iowa,” Ray replies.

Many baseball fans that also take an interest in films will rank Field of Dreams near the top of their favorite baseball movies. The story of the man who “until I heard the Voice, I’d never done a crazy thing in my whole life.” resonates with baseball fans. A good game of catch with Dad is burned into many childhood memories.

I’m no different. Field of Dreams is one of my favorite movies of all time. I can’t even begin to estimate the number of times I have seen the film since it came out.

I can tell you exactly how many times I have watched it in the last nine years, though. One.

I knew better than to watch it after my dad passed away. I struggle with any show that deals with the loss of a father. I cried at Field of Dreams more times than I care to admit even when my father was alive. I was not about to put myself through that.

I had thought about watching it a few times. Wondered if I could push through the emotion to watch the film again. I also was well aware that pushing the emotion out of that movie would make that movie far less enjoyable. So, I continued on with my memories of the film and avoided it.

This year, on the anniversary of my dad’s death, I decided it was time. I sat down that night by myself while my wife was at a meeting and my daughter was with her grandparents. I started the film and fell in love all over again immediately.

The opening monologue was enough to grab my attention. The dialogue of the characters had me enthralled. I remembered every detail as if I had just watched it last week.

My wife got home near the end of the film. She questioned me, as she should, “this movie? Today?”. She knew what I was up against.

Kevin Costner’s Ray Kinsella recognizes his dad and a tear rolled down my cheek. I knew the line, “Hey, dad. You wanna have a catch” was coming. I knew it would be the one that would destroy me.

I said I remembered every detail…I was wrong. I forgot one that struck me before that iconic line could.

Ray, realizing his dad is in front of him, says to Annie, “What do I say to him?”. Annie replies, “Introduce him to his granddaughter”.

If you go all the way back to the beginning of the film, to that monologue that grabbed me so quickly, you’ll hear Ray explain something that I can relate to. “Annie and I got married in June of ’74. Dad died that fall. A few years later, Karin was born”. I married my wife in July of 2012. Dad died in August the same year. My youngest daughter was born in 2018. It breaks my heart that he never got to meet her.

And, as predicted, I fell apart.

A movie that had always made me cry over the emotion of the son reconnecting with his father had suddenly found a way, 30 years later, to make me cry over something I had never noticed before. A detail that was far too similar to my life now but wouldn’t have mattered much to me previously.

People love to quote the conversation between Ray and Joe Jackson. That conversation is repeated near the end of the film between Ray and his father, John. “Is this heaven,” John asks. “It’s Iowa,” Ray responds shaking his head. Ray then asks, “Is there a heaven?” and John replies, “Oh yeah. It’s the place where dreams come true”. Ray ends the conversation after seeing his wife and daughter on the porch and looking around at the baseball field he stands in, “Maybe this is heaven”.