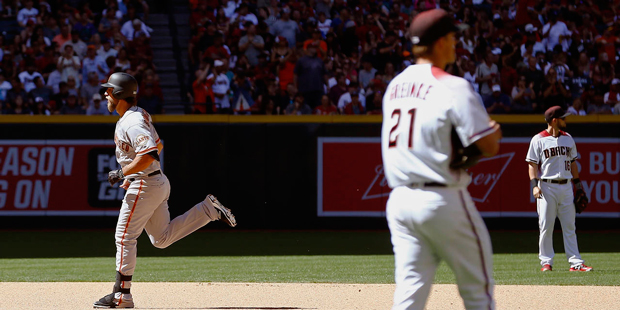 One favorite topic is strange stats and coincidences that occur in the game. For one such recent instance, let’s take a look back to April 2, 2019 and the game between the Arizona Diamondbacks and the San Diego Padres (box score).

Just six games into the season, the division rivals would meet at Petco Park in San Diego for a combined 25 hit performance. The game would end with the Diamondbacks winning 8-5. Despite the miniature slugfest that went on, the focus here is on the Diamondbacks’ hurler, Zack Greinke.

The pitching line, as you would expect, is not overly impressive. His six-inning performance yielded three runs on six hits, including two home runs. He did strike out 10 batters on his way to obtaining the victory.

More impressive was that he hit two home runs in support of his own effort. His first was a three-run blast off Eric Lauer in the fourth inning and his second was a solo shot off Adam Warren in the sixth.

It marked the first time a pitcher had struck out 10 batters and hit two home runs in the same game since 2017. As a matter of fact, it was exactly two years before on April 2, 2017.

That game in 2017 was also special (box score). It was the San Francisco Giants hurler Madison Bumgarner who deposited two home runs in the season opener that season, the first pitcher to ever accomplish that feat on Opening Day.

But the stat line is not the only uncanny coincidence here.

Bumgarner’s Giants lost to the Arizona Diamondbacks on Opening Day 2017. Pitching for the Diamondbacks that day was their ace, Zack Greinke, who surrendered the first of Bumgarner’s dingers that day.