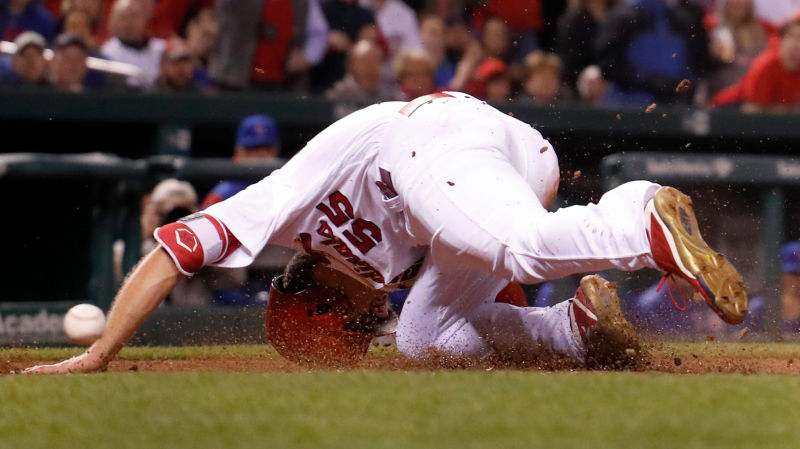 It seems that baseball has a way of painting moments that we often refer to by saying “As so often happens…”. You know the moments – a guy makes an incredible catch to end and inning and finds himself full of adrenaline and leading off his team’s next at bat, a fielder commits and error on a play that would have ended the inning and the next batter smashes a game-changing home run or a pitcher issues a walk to a punch-and-judy hitter and that runner eventually turns into a critical run.

Yes, baseball can be cruel sometimes. It has a way of constantly reminding viewers that anything can happen, to anyone, at any given time.

Piscotty, despite having amassed 815 total major league at bats, came to terms on a multi-year contract with the St. Louis Cardinals on Monday. The contract provides the young outfielder with stability and the team with some much needed financial clarity moving forward. It has been heralded as a deal that benefited both sides. The pact covers six years, with an optional seventh, and totals at just over $35 million guaranteed.

The newly minted multi-million dollar outfielder took the field on Tuesday for the second game of the marathon known as the Major League Baseball regular season. The fifth inning of the contest rolled around and Piscotty set out to make a difference in the game through some tenacious hustle.

His inning started off by getting hit by a pitch on his elbow, allowing him to take first base in a very painful way. That’s a rough start but a player simply hopes that the pain subsides while he runs the bases and he can go on with the game.

Piscotty showed off the aforementioned hustle when the first pitch to Kolten Wong hit the dirt and skipped away from Chicago Cubs catcher Willson Contreras. Piscotty immediately broke for second and slid in safely. Not because he beat the throw, necessarily, but because the throw actually struck him – squarely on his elbow. The opposite elbow of the one that put him on the base paths in the first place. Piscotty had been hit twice in one inning, once on each elbow.

Now in scoring position, he settled in to his lead as St. Louis Cardinals second baseman Wong hit a slow roller to the right side of the infield. As the ball trickled out of the reach of Cubs pitcher Jake Arrieta, second baseman Javier Baez raced in to attempt a miraculous play and retire the speedy Wong. The ball avoided the webbing of Baez’s glove and skipped away, yielding an infield single for Wong.

As the ball skipped away, Piscotty’s hustle was back on display. He broke for home, looking to score the game’s first run for his team and cut the two-run deficit in half. He slid home safely, albeit once again tragically.

This time, as he slid across the plate, Baez would recover and throw a bullet to Contreras to try and make up for his fielding error. The throw would find Piscotty once again, this time striking the ear flap of his batting helmet. Piscotty lay on the ground for several moments dealing with a seemingly unprecedented third time of being hit by the ball in one inning.

Piscotty was removed from the game, though he left the field under his own power. Manager Mike Matheny would tell reporters after the game that Piscotty would undergo concussion testing that night and the following morning. He did state that it was precautionary and based on the outfielder’s interactions, it was not anticipated that he would miss any further playing time.

Astute fans will remember back to 2015 when Piscotty had another scary incident on the field. That incident did cause a concussion as well as a head contusion as he collided with then teammate Peter Bourjos as they pursued a fly ball. It would lead to a stay on the disabled list and a lingering neck issue for most of the season for Piscotty.

Getting hit three times in one inning, once in each elbow and once in the head, is most likely not the way Piscotty envisioned celebrating his newly minted contract. Thankfully, it appears that he will have the chance to return to the field very quickly.

Piscotty was replaced by Matt Adams, who remained in the game after pinch hitting for pitcher Adam Wainwright. Adams would play left field while Randal Grichuk would slide over to right field. Adams, who had never played an inning of baseball at the major league level in the outfield, hoped to hide in left.

As so often happens, the very first hitter struck a routine fly ball to left field, which Adams handled easily. Though, it probably would not be described as graceful.