Home » Featured » Your Mascot May Be A Tool For Promoting Racism 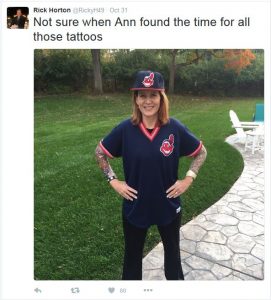 Fox Sports Midwest broadcaster Ricky Horton inadvertently triggered some backlash on the Twitter machine last night.  The backlash itself wasn’t all that widespread, and it didn’t result in a #FireRickyHorton meme or trending topic.  However, it did stir the coals of a long-running conversation about racism and mascots long ago deemed to be “racially insensitive”.  That conversation tends to take on a definitive “You’re a racist, if you….” tone, and I’m just not comfortable with that.

At an individual level, maybe racism should be measured on some kind of scale, because nobody seems to agree on the details.  Everyone has a slightly different baseline or tolerance, and greater understanding of these differences could help shape a better, more constructive dialogue.  If you start a debate with an argumentative tone with someone who already has a defensive posture, things may end terribly, even though you may both agree on the fundamentals.  So, let’s begin with the basics and try to at least agree on how to frame the discussion.  To help set the floor here, I’ve created a scale that is definitely not all-inclusive, but it provides the necessary reference framework for what I hope will be a glimpse into my complicated feelings about racism, baseball, and cat videos.

IDIOTS GUIDE TO RACISM ON A SCALE

There are a lot of sports teams still using racially insensitive logos, names, mascots, and cheers.  I hesitate to lump them all into one category, even though I feel several fall into the 5-6 range.  The challenge is that while some are owned/operated by a single person or collective, others are institutions with checks-and-balances systems in place that involve multiple interest groups and decision makers.  For the former, it’s easy to single out a particular majority owner *cough* Dan Snyder *cough* and paint him as Satan in a suit.  For some schools, there is a board, chancellor, athletic director, influential boosters, and other groups involved.  Maybe the board is collectively a Level 2, but the people with the money are collectively Level 5.  Money talks.

The principal owner of the Cleveland Indians is Larry Dolan.  I have no idea where he falls on the scale.  What I do know is that the use of Chief Wahoo as an entity representing the Cleveland Indians is racially insensitive and offensive to many Native Americans.  Let’s pause to make a distinction.  Chief Wahoo is not a racist, because Chief Wahoo is a mascot, and a racist by definition is a person.  The use of “red face” is racially insensitive and offensive to many Native Americans.  Same can be said of the team’s name, logo, and the person responsible for thinking Chief Wahoo was a good idea at some point.  Dolan has the power to effect real change, and he sits idly while an opportunity to lead the organization in a new direction passes him by.  Passiveness or inaction may not equate exactly to active racism, but it’s close enough for anyone on a soapbox to pass judgment.  The longer the period of inaction, the less that can be won by making the branding change.  If Dolan makes the move sooner rather than later, he can both capitalize on the World Series honeymoon period given by the media and the relative goodwill of Cleveland fans.

It won’t happen.  The Indians brand may never be stronger than it is now, and you usually don’t mess with a good thing.  But one can hope, right?

I’d encourage him to make the change, but I’m honestly not morally outraged enough by all of this to rally the villagers with pitchforks.  I most definitely should be, and my own level of disinterest probably means I’m a bad person.  In my own defense, it’s not that I don’t care.  It’s just that I really don’t think it’s that important in the grand scheme of things.  Maybe that makes me part of the problem.  I just don’t think that keeping the name and everything that comes with it is nearly as bad as hate crimes, racial profiling, bullying based on race, or a host of other issues related to race in this country.  It’s on the list, but it’s not in the top 5.  Sorry, not sorry.

Racism is prevalent in America.  I feel comfortable stating that without linking to an official study or scientific paper on this topic.  I also feel comfortable stating that racism graphed for the entire population probably resembled a bell-shaped curve a few decades ago.  Up until the 1950’s, the curve was probably leaning quite heavily to the right side, because racism was big then.  It’s (hopefully) leaning the other direction now.  Generally speaking, increasing awareness and acceptance are shifting that distribution, and I’d love to credit activists and various organizations with this shift.  I won’t though, because I don’t think the lion’s share of the credit belongs to them.  I think a combination of attrition and nurture is primarily responsible, and that gives me hope for the future.

The race war will be won eventually, and it can be won almost entirely without overthinking it.  You just have to be patient enough for the old, racist people to die and be replaced in the population by people who aren’t raised in an era in which derogatory racial slang in everyday use was the norm.  Yes, that’s an oversimplified way to say it, and my language lacks a certain elegance, but there is a grain of truth there (no matter how poorly conceived).  We’re currently raising a generation of kids who for the most part really don’t see color, and that’s an amazing, beautiful thing.  “Mixed” marriages and diversity helps.  Education regarding where your genes really come from has opened a lot of eyes as well, because nobody is 100% anything these days, and maybe they never were.  Regardless, the current generation of kids will probably raise another generation that thinks the same way.  Milennials are probably headed in the right direction as well, albeit with a relatively combative attitude about it.  They may help accelerate the change so many desire, but that’s just a bonus.  There’s a light at the end of the tunnel, and we’re nearing a time when all the minorities form the majority.  Together.

As for the Indians (and Braves, Redskins, Seminoles, and Peoria Chiefs), the team’s branding invites ridicule.  Painting your face red is a mockery of those who did so and continue to do so out of tradition based on a belief system.  Same goes for the Tomahawk Chop which sounds ridiculous and looks even worse.  I can’t make you stop or change anything, but I can continue to ridicule you and some of your fans.  I can continue to avoid your merchandise and boycott your places of business.  For the most part, I can do so quietly.  Maybe others will do the same until you feel the pressure lessening in your fat wallet.  I can understand why you would wait for your racially insensitivity to hit the bottom line, but it would be prudent to make a change now before the Merfluvians take over baseball with their unique combination of athleticism and business acumen.  Alternatively, you can wait for Ricky Horton to knock you upside the head with an 82-mph “fastball”.

Thanks for reading but don’t @ me. *hugs