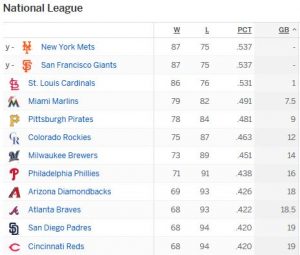 Missed It By That Much

The Cardinals begin the off-season sooner than many expected and with a lot more questions than legitimate answers.  Granted, not many thought that they looked like a 95-win team coming out of Spring Training, but after 162 games, they certainly looked like a team that should have won more than 86.  If you can get beyond the spectacularly deficient defense, mediocre starting pitching, sketchy bullpen, and heavy reliance on home runs for offense, you’ll find that they somehow still managed to stave off their elimination to the last game of the season.  That’s quite an accomplishment for a team that needed a 4-game winning streak to reach the elusive 10 games above .500 mark.

The Bright Spots – Throwers of Round Projectiles Edition

The Not Bright Spots – Swings and Misses Edition

Matheny, Mike – Author of a Manifesto

I’m loathe to admit that not everything can be pinned on the manager (any manager), and goodness knows that Matheny gets an awful lot of grief – both deserved and undeserved.  That the 2016 Cardinals weren’t a 100-win team isn’t on Matheny.  That they weren’t at least 2-3 games better probably is.  Don’t bother swiping left or right though.  Matheny will likely get to brood at the top step of the St. Louis dugout for many years to come.