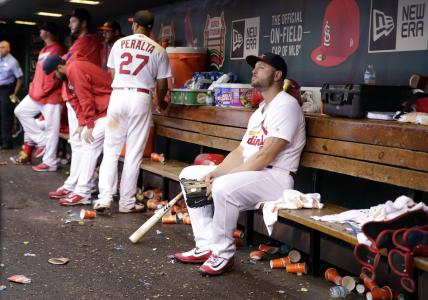 Since the inclusion of the Wild Card format in Major League Baseball, Game 162 has become a magical time when most anything can happen. The final day of the regular season now holds future implications for numerous teams creating an air of excitement and anticipation around the league. As exciting as that day can be, the timing can sometimes eliminate all of the emotion in an environment.

The St. Louis Cardinals took the field on Sunday with some control over their own destiny but not full control. If they wanted to keep playing in 2016, they would need to win. Unfortunately, they would also need the Los Angeles Dodgers to defeat the San Francisco Giants. The Cardinals held up their end of the bargain.

Before the Cardinals could put together the 27 outs needed to seal their game, the Giants put a bow on their season with a victory over the Dodgers. The Giants, fully in control of their own destiny, lived up to the challenge and punched their ticket to the playoffs. As the Giants finished their game and began to celebrate, the Cardinals were taking the field for the eighth inning.

The romanticism of this game was on full display as fans began to realize the levity of the situation. The season over and a more than comfortable lead in this final contest, fans turned their attention to a star player that may be ending his tenure with the team.

The bottom of the eighth inning brought a pinch hitting opportunity to the field and the fans began to voice their opinion. Chants of Matt Holliday’s name rang out from the faithful, wanting one last opportunity to express their love for the big left fielder.

One has to feel bad for Garcia. The young man, who is not disliked at all in St. Louis, was showered with a chorus of jeers from the fans. Dan McLaughlin, doing play-by-play for the television broadcast, noted that Garcia was receiving boos from the fans “simply for being Greg Garcia and not Matt Holliday.”

But as the eighth inning came to a close and the Cardinals prepared to take the field for the final three outs of the 2016 season, Holliday emerged from the dugout and took the position he had patrolled for many years in left field. The remainder of the team waited in the dugout.

It’s hard to imagine the word “intimate” can apply to 30,000 people but a better word may not exist for that moment. A completely empty field with the exception of Holliday was showered with a loud ovation. A well-deserved sign of respect was reserved for one of the Cardinals’ most consistent players of the last decade.

Holliday took it all in. He tipped his cap and waived to fans, his eyes filling with tears. He watched as the first pitch of the inning was called a strike. He was then replaced by Tommy Pham as the crowd roared to its feet one final time for Holliday.

He sat in the dugout with Yadier Molina and Adam Wainwright to watch the season come to a close. A fitting place for three men that have been the core of this team. Wainwright joked with his teammate and sat with his arm around the big man for one final time in the same uniform.

The Giants won the day. They will continue their season and move forward in 2016. The timing of that win gave St. Louis an opportunity to forget about the playoffs and focus on a player.

It doesn’t happen often, but sometimes baseball plays out as poetic on the field as it does in our memories.

Bill Ivie is the founder of i70baseball and a freelance writer.
Follow him on Twitter to talk all things baseball.