Story tied the rookie record for home runs in April with 10, and earned the NL Rookie of the Month honor because of it. But one thing has been missing from Story’s tale, his rookie card.

Story’s first pack-pulled Rookie Card will appear in 2016 Topps Stadium Club Baseball, which is set to come out on June 29. This will include a base card and rare parallels for baseball fans to chase.

He will also have a Rookie Card in 2016 Bowman Chrome giving collectors a chance to pursue popular refractors of crazy colors including Blue, Green, Gold, Orange and the ever-elusive SuperFractor.

Those looking to add his first autograph card to their collection will want to check out 2016 Topps Allen & Ginter. His first rookie autograph will appear in the popular set that is scheduled to release on July 20. 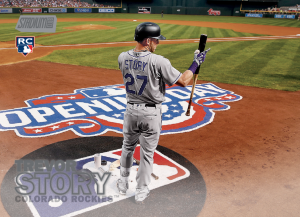 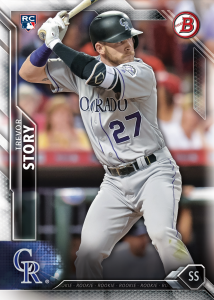