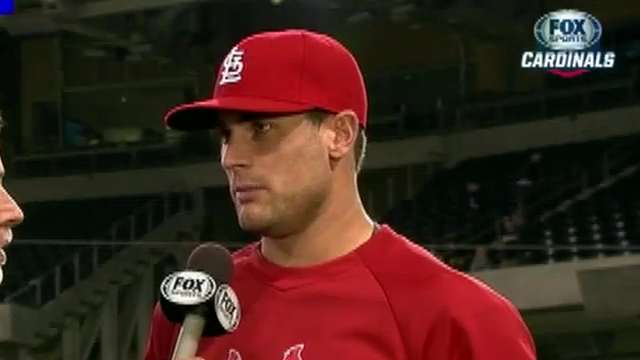 There are good relievers, and there are mediocre relievers.  Then there’s fifty feet off crap, and then there’s Tyler Lyons.  Maybe he’s just supposed to be the “break glass in case of long relief” emergency guy, but he just seems to be consuming roster space.  He’s made 3 appearances in June for a total of 4 unimpressive innings.

Well then what’s the point of Lyons being on the active roster, if he’s spending less time on the field than the bat boy?

The easy answer is that Lyons is out of options now, and the bat boy probably is not.  That’s great, but one seems to be a vital piece for a potential playoff contender, and the other is Lyons.  That’s not to say that Lyons cannot be useful; rather, the problem is that he’s not being useful (or used).  That’s on the manager, and bullpen management is to Matheny what discretion is to a Kardashian – a seemingly foreign or at least willfully ignored concept.

Matheny has 1 really effective reliever (Oh) and another fairly effective one prone to giving up home runs (Siegrist).  In that sense, the bullpen is like the Black Eyed Peas which I usually refer to as “Will.i.am, Fergie, and those other guys”.  So, let’s recap the last 6 games for Oh, Siegrist, and the Other Guys.

Maybe the return of Seth Maness will help, but the bullpen needs more than a high contact rate guy who gets ground balls.  It needs a swing-and-miss guy too.  If one or both can take some of the workload off of Rosenthal, Siegrist, and Oh, that would be splendid.  Siegrist appeared in half of the 162 games last year (that’s 81 appearances for people bad at the math).  He’s just off that pace with 31 appearances through 69 games.  Oh is actually ahead of that pace with a team leading 36 appearances.  As for Rosenthal, he’s pitched in 241 games since the start of the 2013 season and finished 151 of those.  Understatement:  He’s thrown a lot of pitches under duress.

Many hands make for light work or something like that (It’s a proverb or an adage or maybe a unicorn).  If so, then Bowman, Broxton, Lyons, and Maness need to step up and lighten the load for everyone else.  To do that, they need opportunities.  Matheny could help with that, and it’s in his best interest to do so.  After all, the Cardinals are 5-11 in 1-run games.  They could just as easily be 11-5, and that would put them closer to the division lead than the WC2 spot.  Alas, they are prisoners to an objective reality in which they are still 5-11 in such contests, and one might argue that the bullpen deserves the Lyons share of the blame…