Gridiron stars to be featured in 2015 Topps Dynasty Baseball

The beautiful 2015 Topps® Dynasty® Baseball releases with a few surprises for baseball – and football – fans.

Dynasty features some of the greatest athletes, including three stars who are well known for playing football, but enjoyed their time on the diamond as well. Football stars John Elway, Dan Marino and Russell Wilson, all have autographed relic cards in 2015 Topps Dynasty Baseball.

John Elway appears in Dynasty as a New York Yankee. In 1981, the Yankees drafted him in the second round. Elway played in 42 minor league games with Oneonta of the New York Penn League and, as an outfielder, he hit .318 with four home runs, six doubles and three triples.

The Kansas City Royals drafted Dan Marino in 1979 with their the 21st-round pick. Marino was drafted as pitcher, but he didn’t stick with baseball. Instead, he went on to become one of best quarterbacks in NFL history.

In 2010, Super Bowl champion Russell Wilson was drafted in the fourth round by the Colorado Rockies. He played two seasons in Single-A baseball before going back to play college football. In 2013, the Texas Rangers picked him in the Rule 5 draft.

Baseball and football fans can find their autographed relic cards in 2015 Topps Dynasty Baseball, which comes out on Wednesday.

To see more images of these cards and a full checklist, visit The Topps Blog.

The anticipation for 2015 Topps Dynasty Baseball is as high as it can go, and collectors cannot wait to get their hands on these beauties.

While the checklist has been posted, collectors still want to see more pictures to get a look at their favorite players on the impressive design. The checklist includes players such as Ichiro, Roger Clemens, Buster Posey, Hank Aaron, and more.

Dynasty features all on-card autographs and all cards are encased. 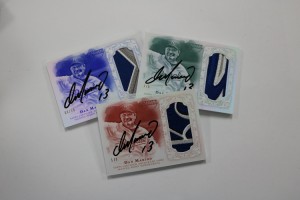