Dansby Swanson in 2016 Bowman Baseball – in an Atlanta Braves uniform

On the eve of the release of 2015 Bowman Draft, an unprecedented move was made in Major League Baseball – the Arizona Diamondbacks traded the 2015 top overall pick, sending shortstop Dansby Swanson to the Atlanta Braves.

Swanson’s first Bowman card appears in 2015 Bowman Draft, and he is also depicted on the box cover. But every image of him on the box and in the product shows him with the Diamondbacks – the team that drafted him.

While Swanson’s first Bowman card pictured him in a Diamondbacks uniform, his first card of him in an Atlanta Braves uniform will be coming soon. 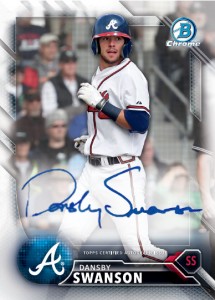 Henry Owens has sat atop of the Boston Red Sox best prospects list for a couple of years, and is now making a run at the Red Sox rotation in 2016. As Owens makes a name for himself in Major League Baseball, there will be only one place to get his autographed memorabilia – Topps Authentics™.

The Topps Company is proud to announce that Henry Owens has signed an exclusive autograph memorabilia deal, bringing Owens’ unique items to the Topps Authentics store, which is available at Topps.com.

“I’m very excited to be a part of this new endeavor with Topps,” said Owens, who made his Major League debut in 2015. “First, being featured in their card products. Now a featured athlete for their Topps Authentics brand. Quite the honor.”

As part of the deal, Topps will sell items such as signed jerseys, baseballs and exclusive Topps oversized cards that will appeal to baseball fans and sports collectors.

“We are thrilled to add Owens to the Topps Authentics lineup,” said David Leiner, VP & General Manager of North American Sports and Entertainment for Topps. “Owens is part of a great, young crop of rookies making a lot of noise in baseball right now.”