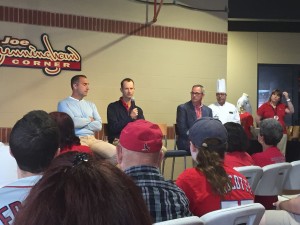 The St. Louis Cardinals have annually invited writers from around the internet to the stadium near the beginning of each season for the last six years. The event begins with an address from the team and an opportunity to talk with General Manager John Mozeliak and team president Bill Dewitt III.

This year, though Dewitt was feeling under the weather, he did join the scrum to provide some insight to various questions from an organizational stand point. While Mozeliak fielded the majority of the questions for the under-the-weather president, Dewitt did take a few moments to talk about the project that has virtually defined his tenure with the team, Ballpark Village.

Ballpark Village has become a staple of visiting Busch Stadium at this point. The multi-use facility is the first of it’s kind in Major League baseball. Dewitt was quick to point out that it is the only structure anywhere in the league that combines retail space, concert space, television studios, a team owned themed restaurant and a view into the stadium.

That’s impressive but fans are quick to point out the timeline that it took to get the project done, which was drastically longer than originally planned. That fact is not lost on Dewitt, who joked that he would talk about the next phase of Ballpark Village but would not give a timetable, because he had learned his lesson with that.

That next phase draws closer to an announcement. Dewitt mentioned plans for a facility that would provide apartment housing, additional retail space and expanded parking. The original plans for the structure were in line with this, making it the next logical step in the development.

Dewitt stopped just short of officially announcing the next phase. He did share that the announcement should come this year, possibly as soon as this summer. He seemed passionate about the possibilities and certain that the fans would enjoy the added amenities.

Rounding out Dewitt’s time with the bloggers was a question posed about the WiFi capabilities of the ballpark. Dewitt pointed out that there are some products needed, provided by Cisco, that are currently on back order. He again joked that the “ready by Opening Day” statement was a bit premature but that he believed the ballpark would have that functionality for its fans very soon.