(OK, I admit, the force was weak with the title intro.  But who cares?!  It is about Star Wars!)

A galaxy far, far away never felt so close.

Boyega plays the character Finn in Star Wars: The Force Awakens and has a leading role in the film.

“We are very excited to have John Boyega join the Topps family,” Topps Star Wars brand manager Mark Von Ohlen said. “He’s such an important part of the movie and having him in the product was pivotal for us. We know all the fans out are going to love opening packs of cards knowing they can potentially find a John Boyega autograph!” 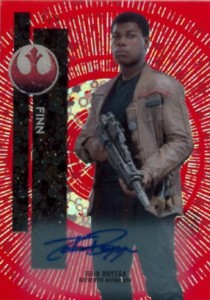