Handprint and fist print autographs have been made popular in Topps’ MLB, NFL and UFC products. They depict a hand or fist print along with the subject’s autograph. In the case of WWE Undisputed, a fist print is used giving wrestling fans an up close and personal feel.

WWE Undisputed is one of the most comprehensive checklists Topps has ever put together for professional wrestling. Many top wrestlers are included in the Fistographs checklist including fan favorites such as Bruno Sammartino (pictured), Ric Flair, Trish Stratus, John Cena, Big Show and more.

2015 Topps WWE Undisputed is scheduled to come out on Nov. 18 with 10 packs per box and five cards in each pack. Each pack will contain one autograph or autograph relic card. 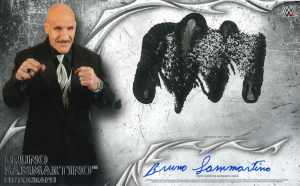 Bowman® Draft is quickly living up to its name this year. The prospect-product features autographs from up-and-coming stars, including two top first-round picks from the 2015 MLB First-Entry Draft.

Dansby Swanson, the first overall pick, and Brendan Rodgers, the third overall pick, will both have cards in 2015 Bowman Draft including their first on-card Chrome autographs.

In addition to the big signers, 2015 Bowman Draft will have no redemptions. All autographs will be live on the day of release – December 9 – making this is a must-have product for collectors who love prospects.

“We’re excited to have players of this caliber in 2015 Bowman Draft,” said Bowman brand manager Zvee Geffen. “Bowman is home to the first cards of many great players, and Bowman Draft wouldn’t have been complete this year without Swanson and Rodgers.”

These are just the first two autograph signers announced for 2015 Bowman Draft. 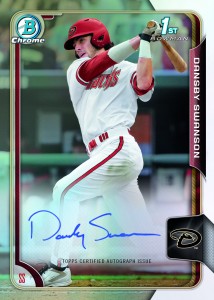