The Jon Jay tenure in St. Louis has come to an end. News has broken from the Winter Meetings in Nashville, Tennessee that Jon Jay has been traded to the San Diego Padres for infielder Jedd Gyorko. While this news shouldn’t come as a huge surprise to most St. Louis Cardinals fans, it does come with some interesting side notes.

First of all, though, it has the sense of being an old-fashioned trade. The team saw a surplus of players at one position and a need for players at another position. General Manager John Mozeliak acted on that to make a move that made sense for the club. Most people assumed Jay would be dealt this off-season. Everyone knew that infield help was high on the to-do list for the team. The deal looks logical from that stand point.

Most fans assumed that the Cardinals would need to assume some responsibility for Jay’s salary, however. Jay was owed $6.225 million for next season, an amount that many felt would hinder Mozeliak’s ability to trade the outfielder. Reports have surfaced that there is cash involved in this deal. Surprisingly enough, it appears to be $7.5 million that San Diego will send to the Cardinals, according to Dennis Lin of the San Diego Union-Tribune.

Gyorko is owed $33 million over the next four seasons, which includes a $1 million buy-out clause on a club option for 2020. The money coming from the Padres lowers that total to around $25.5 million over four years, or an average annual value (AAV) of less than $6.5 million a year. That’s not a hefty price tag for a guy that seems to project as a “super sub”.

That’s the projection currently, at least. Gyorko plays second base primarily and has seen time at shortstop and third base in his career. He is a right-handed option at all three of those positions, giving the team a bit more flexibility. If this move is not a precursor to another move, expect him to find plenty of playing time while giving Jhonny Peralta, Kolten Wong and Matt Carpenter some much needed rest. 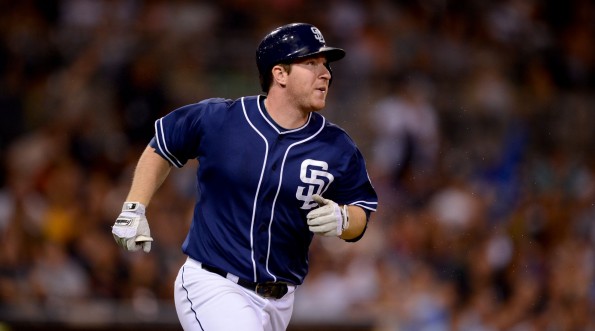 He’s younger than Jon Jay by three years. Jay will enter free agency for the first time after the 2016 season while Gyorko will remain under team control through 2019. He has some pop, averaging 22 home runs per 162 games played in his career. He has a lifetime slash line of .236/.293/.395 (Batting Average/On-Base Percentage/Slugging). He is considered slightly below average in the field. All according to Baseball-Reference.

More than anything else, Gyorko is a commodity the Cardinals lacked. With the emergence of Stephen Piscotty, Randall Grichuk and Tommy Pham, there was simply no room in the outfield anymore. Jon Jay wasn’t going to start playing second base, no offense to Skip Schumaker intended, so something needed to be done. Trading Jay instead of one of the younger players with a higher ceiling was a move that made a lot of sense.

Overall, Mozeliak has found someone to give some rest to the regular fielders while not sacrificing a player that was paramount to the team’s immediate success. Not only that, but he managed to somehow get some salary relief in the process as well.

As with any trade, time will tell how good of a deal it was. The initial reaction to this one will likely be positive, however. Mozeliak is likely to find praise for making a deal like this work for his club.