The Topps® MLB All-Star Rookie Team has been a long-standing tradition since 1960 featuring up-and-coming stars of Major League Baseball. This year’s edition includes two Rookie of the Year award winners and a number of youngsters that are sure to shine in MLB.

Chicago Cubs third baseman Kris Bryant and Houston Astros shortstop Carlos Correa lead the group of the 2015 Topps® MLB All-Star Rookie Team winners. Bryant and Correa both received honors earlier this week when they were announced as the National and American League Rookie of the Year, respectively.

The Chicago Cubs took three spots on the list. Along with Bryant, teammates Addison Russell (second base) and Kyle Schwarber (outfield) received the honor. The New York Mets and Miami Marlins had two players each on the list. Miami’s J.T. Realmuto (catcher) and Justin Bour (first base) were named while the Mets saw Michael Conforto (outfield) and Noah Syndergaard (right-handed pitcher) earning spots.

The Topps MLB All-Star Rookie Team – nicknamed the Topps Rookie Cup – is awarded to one player for each position, a right-hander starter, a left-handed starter, a relief pitcher and – for just the second time – a designated hitter.

Here is the full list of the 2015 Topps MLB All-Star Rookie Team: 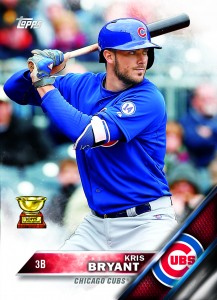