Two of the three top 2015 MLB® draft picks will be getting their first trading card very soon.

Swanson was the first overall pick in the 2015 MLB First-Year Player Draft. The Arizona Diamondbacks selected the shortstop out of Vanderbilt. He played at Single-A Hillsboro this season, and in 22 games, he hit .289 with a .394 on-base percentage and .876 OPS. He had one home run, three triples and seven doubles.

The Colorado Rockies selected Rodgers with the third overall pick. The shortstop hit .273 in 37 games in rookie level. He had a .340 on-base percentage, .420 slugging, .759 OPS with two doubles, three home runs and three triples.

2015 Topps UFC Champions has a couple of firsts for collectors.

Jedrzejczyk’s has a Fighter Autograph in Champions, which is gaining plenty of attention from UFC fans. But collectors aren’t just chasing her ink. Champions also features Jedrzejczyk’s UFC rookie card.

The undefeated fighter made her debut on July 26, 2014, and defends her title in a November fight against No. 9 Valerie Letourneau.

VanZant has two autographs in Champions in the Fighter Autographs and Fighting’s Future Autographs (numbered to 50) subsets.

VanZant made her UFC debut on Nov. 22, winning Fight of the Night honors. The sixth-ranked women’s straw-weight fighter has three straight wins and is set to fight No. 8 Joanne Calderwood in December.

Her rookie card appeared in 2015 Topps UFC Knockout and has gained plenty of interest from UFC fans and collectors. 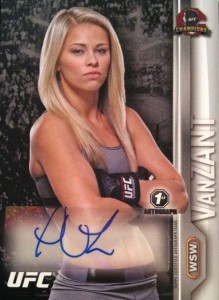