Major League Baseball players inspire fans of all ages, facing challenging odds on their climb through the professional ranks. Some players endure additional obstacles – and their successes reflect the determination and resolve of the human spirit.

In that spirit, Topps, the official baseball card of Major League Baseball, is launching “Pride & Perseverance,” a special insert set in 2015 Topps® Baseball Update Series that celebrates Major League players from the past and present, who have triumphed in spite of disabilities that have come their way.

The set will be released on Wednesday, October 21st, in time to celebrate the 70th anniversary of National Disability Employment Awareness Month and honor 25 years of the Americans with Disabilities legislation.

“As a game for all, Baseball is proud to be the sport of Jim Abbott, Curtis Pride and many world-class athletes who have overcome obstacles en route to success in the Major Leagues,” said Wendy Lewis, MLB Senior Vice President of Diversity, Inclusion & Strategic Alliances. “This special set from Topps is a terrific way not only to honor all individuals who have faced challenges and reached the highest level of their chosen sport, but also to inspire anyone who dreams of one day being a part of the “National Pastime”. We commend Topps, a longtime valued partner, for this extraordinary tribute to players who have made an enduring impact on our game.”

In 2014, the Professional Baseball Athletic Trainers Society (PBATS) proposed a special card series, featuring players with disabilities, within Topps’ 2015 set. Throughout Baseball history, these players have enhanced the game with their skill and encourages all with their pride and perseverance.

“People with disabilities are often looked at for what they can’t do instead of being appreciated for what they can do. We hope these cards will help people take a closer look at the potential of people with disabilities,” said, Mark O’Neal, PBATS President and Chicago Cubs Director of Medical Administration. “Imagine if a child or the parent of a child with a disability, by simply opening a pack of baseball cards, discovers that one of their heroes was legally blind or deaf or has battled cancer? They would truly feel empowered and encouraged.”

The set will feature current and former Major Leaguers, including:
– Chicago Cubs pitcher Jon Lester and first baseman Anthony Rizzo, who are both cancer survivors;
– San Francisco Giants pitcher Jake Peavy, who is legally blind without his corrective lenses;
– Houston Astros outfielder George Springer, who has overcome stuttering;
– New York Mets reliever Buddy Carlyle, who was diagnosed with diabetes in 2009;
– Oakland Athletics outfielder Sam Fuld, who has dealt with Type 1 Diabetes since age 10;
– Jason Johnson, a diabetic former pitcher who was the first MLB player to wear an insulin pump during regular season games;
– Jim Abbott, who won a gold medal for the 1988 U.S. Olympic baseball team and threw a no- hitter for the New York Yankees in 1993, despite being born without his right hand;
– Jim Eisenreich, who played 15 years in MLB and won the 1997 World Series with the then- Florida Marlins, who was born with Tourette’s syndrome;
– Curtis Pride, a former 13-year MLB player, who was born deaf;
– Pete Gray, a former outfielder who played for the St. Louis Browns in 1945 and spent six  seasons in the minor leagues, despite having lost an arm in a childhood accident;
– William Hoy, a former centerfielder was one of the first and most accomplished deaf players in  the major leagues, having played from 1888-1902

“The creation of this set is very important to Topps,” said David Leiner, VP & General Manager of North American Sports and Entertainment for Topps. “These men overcame great odds to make it to the Majors and did it with what many people would label a disadvantage. They are an inspiration to all who face challenges in their lives and we are honored to showcase them in our product.” 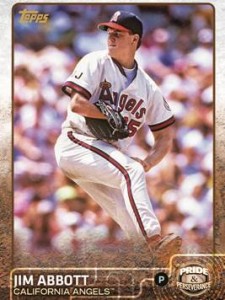