Carlos Correa is one of the hottest rookies in Major League Baseball right now, garnering attention for his spectacular play with the AL West-leading Houston Astros.

Correa became the third-fastest player in MLB history to reach 15 home runs before turning 21 years old (62 games). The other two players on the list include Willie Mays (55) and Frank Robinson (58).

That statistic certainly puts him in elite company – already getting his name mentioned with some of the all-time greats, and his popularity has led many baseball fans scrambling to get his autograph.

The only place to get it on an officially licensed MLB trading card is with Topps.
Topps and Correa recently announced an exclusive multi-year autograph deal that will include trading cards, memorabilia and more. His first autographed card since the deal began appeared in 2015 Bowman® Chrome, which released Sept. 4.

Correa will appear in a number of upcoming products, catering to all types of baseball fans and collectors. His autographs will be in 2015 Topps® Triple Threads®, which releases Sept. 16, followed by Topps Supreme® and Heritage® High Number. (image attached)

With Correa being an exclusive partner with Topps, he is highlighted throughout its products giving collectors a chance to chase the signature of one of the most dynamic 2015 rookies. Collectors can also find Correa’s autographs in Topps High Tek®, Bowman’s Best, Topps Heritage ’51, Topps Strata® and Topps Update. 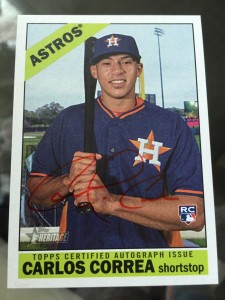