The Academy Award-nominated actor will be signing cards of the fictional boxer Rocky Balboa, whom he portrayed in the Oscar-winning film Rocky.

Every year, Allen & Ginter melds sports and pop culture into one product. This year’s release is no different as we bring one of the most popular sports characters in history to a trading card.

2015 Topps Allen & Ginter is scheduled to come out on July 22. It will feature current MLB® stars along with sports champions, pop culture figures and other celebrities. 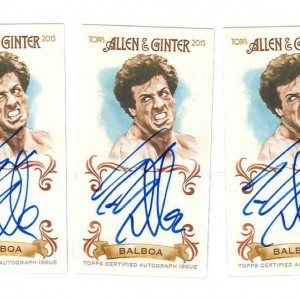 Soccer fans around the globe are going to be thrilled for this unique Topps card set, but they better grab them before they go away.

Topps is creating oversized 5-by-7-inch cards of the 2014-15 Topps® Premier Gold™ set that are only available on Topps.com – but for one month only. The complete set will include 150 base cards along with the New Signings, Captains and Future Stars inserts for a total of 200 cards offered in each set.

This is the first time Topps is offering a complete set of this magnitude on Topps.com. The 200 cards highlight the best of the Barclay’s Premier League with rising stars and fan favorites.

All base sets are numbered to 199 copies and will contain two rare randomly inserted bonus cards of one Orange parallel, numbered to just three copies, and one Gold parallel, an exclusive one-of-a-kind card.

Other parallels of the base set will be offered with all sets containing an Orange and Gold bonus card.

The only place to pickup the oversized cards of 2014-15 Topps Premier Gold is at Topps.com, and are only offered for a limited time.