On Monday, the Cardinals released the nominee list for what will become the second induction class to franchise’s Hall of Fame. Last year’s inaugural class of Willie McGee, Jim Edmonds, Marty Marion and Mike Shannon set a strong standard to put the club’s new effort into motion, and set quite a standard for the new class to follow.

Luckily enough for the Cardinals, there is no shortage of prestige to pull on from their lineage. However, while last year’s voting portion of the Hall of Fame class had two of the most exciting –and recent— members of the team’s past to choose from in McGee and Edmonds, this year’s class is a bit more challenging. Diverse cut of players from across the Cardinal spectrum, ranging from the late 1960’s championship teams, through the early 2000’s teams that returned to the franchise to the World Series level, are present.

However, it is the stories and conditions of each that truly make this interesting. From the lost portion of the team’s most lopsided trade loss, then two of the most consistent contributors in the transitional eras of the 70’s and 90’s, all the way down to one of the game’s most infamous presences, this class has it all.

So how will it all play out? Or more important, how should it all play out when the dust settles and two new players are voted in by the fans at Cardinals.com to join the veteran selections for this year’s Cardinal Hall of Fame class? Taking a look at the credentials, as well as some of the realities of each, shows why sorting out the ranks of club-specific Hall will continue to be annually intriguing outcome.

The 2015 Cardinals Hall of Fame Nominees

Steve Carlton—Pitcher, 1965 – 1971: His name is the one that stuck out the most on first glance, if for no other reason than his career really became what it did after his St. Louis days were done. “Lefty” is on the short list for greatest left-handed (or really any handed) pitcher of all-time. But he won the first 77 of his eventual 329 victories as a Cardinal and was a three-time All-Star in St. Louis as well.

He averaged 15 wins a season from 1967 through 1971. It is arguable about which was his top Cardinal campaign, whether it was his 17-win, 211 strikeout ’69, that came along with a 2.17 ERA. It was during that season that he set the then MLB record for strikeouts in a game, when he rung up 19 Mets. In his next year he another strong offering, notching his first 20-win season (he would reach the mark five more times), as well as authoring 18 complete games and four shutouts as well. Of course following that year a dispute over $5,000 dollars between him and Gussie Busch sent Carlton packing to Philadelphia for Rick Wise and he went on to have one of the greatest seasons ever pitched in 1972, but Carlton’s St. Louis tenure was certainly strong, albeit a interesting one to be offered Hall of Fame candidacy with the club. 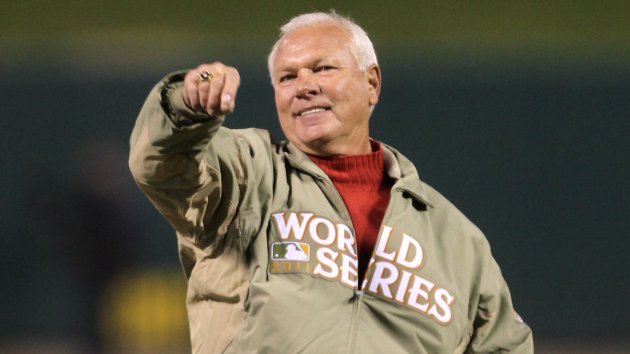 Bob Forsch—Pitcher, 1974 – 1988: The durable stalwart that bridged the lean years of 70’s into the prosperity that was Whiteyball. Forsch tossed two no-hitters for the Cardinals, one in 1978 and another in 1983. He remains the only pitcher in club history to post multiple no-no’s in his career. In addition to those peaks, he reached double digits in wins nine times, including winning 20 games in 1977.

Forsch’s 163 wins in the Cardinal uniform are third behind only Hall of Famers Bob Gibson and Jesse Haines. His 2,658 innings are the third most in club history as well, and his 1,079 strikeouts are fifth best ever for the franchise. Forsch’s last moment associated with the club was a memorable one as well, as he threw out the first pitch in game seven of the 2011 World Series shortly before he died the next week at age 61.

Forsch offers an interesting case, as he was the team’s best starting pitcher arguably between Gibson and potentially Chris Carpenter –with potentially only another candidate to be named later interrupting that run. Will fans remember his steady, yet somewhat unspectacular career fondly enough in comparison against the bigger names on this list enough to vote him in is a bigger question?

Keith Hernandez—First Baseman, 1974 – 1983: He was one of the great fielding first basemen in the history of the game, and he began to take form as one of the best players of his era during the first half of his career he spent in St. Louis. His rise to prominence coincided with the resurgence of the franchise in the early 80’s as well.

He won five of his eleven straight Gold Gloves as a Cardinal, and had his greatest season as a member of the club when he won the 1979 National League Most Valuable Player. He led the league in three categories, including average (.344)runs scored (116) and doubles (48). Hernandez also turned in 210 hits, 11 triples and the first of his two All-Star appearances with the club as well. He was the cleanup hitter on the 1982 World Championship team, carrying a .282 postseason average.

Despite moving on to have similar success with the Mets halfway through his career, Hernandez maintained a strong gratitude to his Cardinal roots.

Mark McGwire—First Baseman, 1997 – 2001; Coach 2009 – 2012: He had one of the most memorable and noteworthy runs of any player in history during his run in the late 90’s. His acquisition was the most buzzworthy acquisition in team history, and he followed it up with 94 home runs over his first 206 games in St. Louis. While there is some tarnish on the silver of its memory now, McGwire’s electrifying display in route to breaking Roger Maris’ single-season home run record was the turning point in rescuing baseball from its post-strike despair.

His 70 home runs in 1998 and 65 homer encore in 1999 are the top two homer seasons in club history. Despite only playing in 100 games twice over his four full seasons as a Cardinal, his 220 home runs are sixth in club history. He later returned to the team has hitting coach and made a pivotal difference in the approach of many of the team’s most productive bats, including the lineup that won the 2011 World Series.

Now whether the court of public opinion will be kind enough to cast a passing ballot for him is a whole different issue, but it should be interesting considering there is neither the overwhelming presence of fan favorites Jim Edmonds or Willie McGee to join him on the ballot this year.

Matt Morris—Pitcher, 1997 – 2005: The aforementioned other pitcher that could stand in Forsch’s way of being the Cardinal starting standard between the team’s two Cy Young winners? None other than Morris, who was the most consistent performer off the bump from the mid-90’s until the early 2000’s. He was the all-around promise that became true in an era when Cardinal pitching prospects regularly flamed out. Morris went from first round pick to the Majors in two years, where he delivered on promise with a Rookie of the Year runner-up finish in 1997.

After Tommy John surgery sidelined him for most of 1998 through 2000, he came back full speed where he left off by 2001, becoming one of the best pitchers in the National League. Armed with a devastating curve ball that made his precision power fastball even more imposing, Morris led the NL in wins with 22 in 2001, when he made the first of two consecutive All-Star Games. From ’01 through 2005, Morris won 79 games, including three seasons of 15 or greater. There was always a feeling that Morris could have been much, much more due to the speed bump of that early career arm injury, but what he was at his best was pretty dominant.

Morris gets lost in the shuffle of being at his best at a time when the franchise mostly was not at, which could continue to hamper his Hall of Fame notice, despite being a fairly recent contributor in a timeline sense.

Edgar Renteria—Shortstop, 1999 – 2004: He remains an anomaly in the post-Ozzie era: a shortstop that could stick over time and produce as well. Renteria was a hot rising property and World Series hero when he came over from the Marlins at age 22 in 1999. But he spent his longest tenure of his career with one team as a Cardinal and became one of the best shortstops in the game in St. Louis.

2003 was his best season as a pro, when he hit .330, drove in 100 runs, scored 96 runs and totaled 194 hits, 47 of which were doubles. Renteria won both a Silver Slugger and Gold Glove during the season, feats he did two and three times total as Cardinal, respectively. He also played on arguably the best infield in team history with Albert Pujols and Scott Rolen in 2004 and was a pivotal part of ushering in the run of success that defined the second half of the LaRussa era in St. Louis.

It is encouraging to see Renteria be put forward by the Red Ribbon voting committee, and he could make a strong push to due to his recent career and strong overall performance. Despite the fact that he is one of the few players to cleanly leave the team mid-career via free agency in recent history.

Ted Simmons—Catcher, 1968 – 1980: Maybe the most underrated performer in team history, Simmons was the best hitter on the barren Cardinal teams of the 70’s. Simba made his Major League debut at age 18 and finally stuck with the club two years later. By the time he hit his peak, he was a perennial All-Star (six times, two runs of three consecutive) and a big time bat at catcher in an era when that was far from common.

Overall, Simmons hit .298 in the uniform and is far and away the franchise’s home run leader amongst catchers with 172. He has driven in over 300 more runs than any other catcher in team history. His 1975 season was best of his career, when he hit 18 home runs, drove in 100 runs and hit .332, good for second in the National League that summer.

The fact that he appeared on just over 3% of Hall of Fame ballots in his lone appearance on the card is still one of the great mysteries of the voting ledger. Perhaps he can do better with his hometown crowd.

Joe Torre—Catcher, 1969 – 1974; Manager, 1990 – 1995: He has gone on to one of the most robust and complete careers in baseball history, so it is not surprising that sometimes how impactful of a player he was gets lost in the shuffle. But Torre was in his mid-prime when he reached St. Louis, and made a huge impact. His 1971 Most Valuable Player season is one of the best campaigns in club history, when he hit .363, ran up 230 hits and drove in 137 runs, all league-leading totals. It was the second of four consecutive All-Star appearances he made in the six years he spent in St. Louis between Atlanta and concluding his career as a Met.

Torre later returned to the team as the successor to Whitey Herzog as manager for the first half of the 90’s. And while he did not raise the team to the levels he reached with the Yankees, which secured his place in Cooperstown, Torre cut his teeth and affirmed the tactics that allowed him to get that opportunity to do so in St. Louis.

Torre would seem to be the best candidate to get induction this year, fresh on the notoriety of reaching the Hall and a clearly robust contribution to the Cardinal legacy.