I-70 is back for the final day of the 2015 Cardinals Care Winter Warm Up, at the Hyatt Regency in downtown St. Louis. If you have missed the first two entries, the PB will be posting commentary from the player media sessions at the WWU, along with analysis and regular updates throughout the duration of the event.

If you missed either of the first two entries from the weekend, head back to Day 1 and Day 2 for comments from Jason Heyward, Matt Carpenter, Adam Wainwright, Matt Holliday and more.

Coming out of the gates, lets acknowledge a few things that have happened here in Day 3, a few the fault of your writer and another just a consequence of the day.

#1) Kolten Wong and Carlos Martinez made it to the podium before we made it on site, so they will not be reflected.

#2) We attended Mike Matheny‘s session and got notes from it, but the direct quotes did not record, so his session will not be a verbatim one, as others will.

#3) Sadly, Yadier Molina did not come to the media podium during his time at the WWU, so he will not be included here.

But with that, there were several prominent Cardinals did make their way to both the podium and to our audio recorder, so by extension, to you as well.

On the loss of Oscar Taveras, whom he mentored when he came up to the Major Leagues last year, he described when he received the news of his death and what he meant to him: “I was here in St. Louis when it happened and I could not believe it. Hopefully God is with him in heaven.”

“I was really close with him. When I see a younger guy, I try to reach out and help them with everything. And with him being from the Dominican like me, and I tried to help him with everything that he needed.”

Peralta described his first year with the Cardinals and in the National League as a success, but also a constant learning process. And one that he anticipates to have benefits in 2015:

“Last year was a good year for me. To be in the National League for the first time last year, it was unbelievable to see some of the things that happened for me. I will be more comfortable, so we will see what happens this year. It is more comfortable when you play guys that you know already, as well as the field.”

Continuing on, he stressed that studying and comparing notes with his more experienced teammates made the transition easier: “I watched a lot of video last year, but more than anything I tried asking the guys on the team. Molina helped a lot and Matt Holliday, so they helped out a lot.”

Regarding the addition of his former teammate Max Scherzer to the Washington Nationals, as well as what it means to the National League: “He’s good for the Nationals for sure. He is an unbelievable pitcher. We have a lot of competition this year within our division too, so I think it will be good.”

About where he feels he fits in the lineup best, it is the run producing spots in the middle that best fit his offering: “I feel comfortable anywhere I hit in the lineup, but I feel when I hit cleanup I get to be a big power guy,” Peralta said with a laugh. “But hitting fourth or fifth feels really good for me.”

On what to work on, he hopes to drive in more runs as well as see an upswing in his overall batting average. In regards to his low average with runners in scoring position, he returned back to the issue of learning new pitchers: “Sometimes it was an issue of not knowing the pitchers that much. The more and more I played them last year, the better I felt there.” 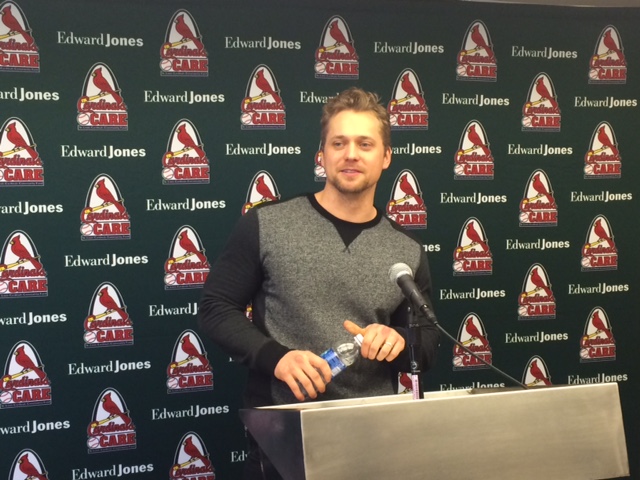 Closer Trevor Rosenthal made his way to the mic next…

Regarding his offseason, he said he removed himself from baseball mostly to spend time with family, but remained in the St. Louis area. He also worked with former Cardinal closer Jason Isringhausen, who he keeps in contact with regularly and will be inheriting his former number 44 this year.

On evaluation as a closer, he says health and availability is his how he measures his success throughout the year: “I couldn’t tell you how many games I blew or lost last year. I don’t know if that’s my personality or what, but I remember a lot of great games last year, but I also remember the times that I lost a game for pitcher too. And that is not so much hard on me, but I feel bad for the guy I let down.”

“The goal is to always take care of myself everyday so I can give it my best effort when I’m out there. So as long as I can do the little things to make sure I’m available to pitching, I’m okay.”

“Saves are obviously a part of the game, but I really think of them as an accolade and a team effort. I’m just the last guy out.”

Regarding his mental preparation entering his second year as a closer: “I learned that every year is different, as well as to make adjustments and learn from the past. Just continuing to learn is going to be a big part of this spring training this year, and not coming in with a big head and thinking I have nothing to learn too.”

“A big focus for 2015 is attacking hitters early, trying to be more efficient, not be too fine and trying to get my pitch count down. But at times not trying to give up the big hit too early or not being completely confident or convicted. Getting ahead in the count early is important, but at the same time not saying that like it is an easy thing to do.”

Regarding the changes to the structure of the bullpen, specially the addition of setup man Jordan Walden: “I think him and (Matt) Belisle are going to be great. Being with Motte, Neshek and Mujica that these guys have tons of information and things they have learned from different teammates. I think that is the coolest part of any job; being around your peers and learning from their success and failures.”

Regarding his new contract, he explained that it was a good middle ground between team and personal interests: “It is exciting. You know that it is going to take care of itself with the arbitration process, but it is nice to get the whole three years situated. Both of us feel like we got what we wanted.”

He characterized the process of landing the deal as beginning around the Winter Meetings, then taking some time to hammer out the language and terms of it.

In regards to maintaining his free agent years after it, he said it was an important part of the structure of the deal. “It was one of the things that if I gave up free agent years, we wanted to be sure it was worth the while. We wanted for it to be more than just one or two years, but it was not something that we could get situated, but if everything goes well and I pitch well, I’m sure it will be revisited down the line.”