American baseball has come a long way in the last 150+ years. Everything involved in the game has been changed or altered to get the baseball atmosphere that we enjoy today. Even though the concept of hitting a tiny ball and running around the bases hasn’t changed, every other detail of the game has been molded to the specific era. The game was still as competitive and exciting as it is today, and I was fortunate enough to take a trip back in time to participate in the annual 19th century base ball festival in Gettysburg, Pennsylvania.

A co-worker of mine (“Tomahawk”) introduced the idea to me as he knew how much of a baseball fanatic I was. I committed to the base ball festival really not knowing what I was getting myself into. I figured there would be a few teams getting together and playing a game of ‘stickball’ with a homemade ball and a few square makeshift pads as bases. I also decided to bring my glove just in case everyone decided it’d be a better idea to play with gloves instead of without. All of the assumptions I had made were more than incorrect.

I first met the captain of the team, Al “Rocky” Belbol. It was in a parking lot behind a restaurant called Gettysburg Eddie’ which honestly gave me the creeps right off the bat. 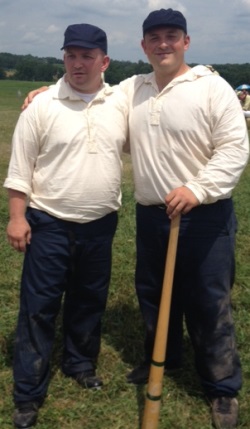 He ended up being a great guy with more than knowledgeable information of base ball in the 19th century. Slowly, I met the rest of my ball club for the weekend. The last individual I met was our pitcher. I was told he was the best in the country, and was one of the individuals to bring back 19th century base ball. Eric “Express” Miklich has reenergized the recreational aspect of baseball by spreading his knowledge and ways to thousands of people across the country. He has compiled a website that explains all the different rules, regulations, equipment, leagues and legacy of the old fashioned game (http://www.19cbaseball.com/).

After shaking his hand and introducing myself, he quickly told me that I would not be referred to by my name this weekend. Back then, all individuals playing were referred to by nicknames to identify themselves. He had offered me the names of “Gin Mill” or “Outhouse”. To save the embarrassment, I went with Gin Mill. Express and Rocky told me know that I had a nickname that I was a part of the Brooklyn Eckfords. Our club was one of 17 others from across the country that would be participating in this festival.

The next morning our uniforms were distributed. To say that the pants were atrocious would be an understatement. They were a heavy, long version of todays’ dickies pants. The pants also had 8 buttons and no zipper along the front; this was either to prevent from falling down due to the lack of advancement of belts at the time, or to really frustrate me when I was trying to go to the bathroom. The shirt was an old-style white cotton shirt with two buttons along the v of the neck. Needless to say, not the appropriate apparel in modern days to play baseball in 90 degree weather.

The game was about to start and I was taking in the equipment that was used in the 19th century. Gin Mill would be taking the field at first base, which was a square shaped sack, full of hay and closed up with a button. The ball field was deep in the fields of Gettysburg and the aroma was just screaming history, making it the perfect place to play 19th century base ball. The field contained grooves, divots, holes, rocks, weeds, dirt, and an uneven ground. The ball is a softer version of the ball used today and has a different finishing coat sewn together with an ‘x’ shaped stich. Home plate was a round wooden board which was essentially just used as a marker for the ‘striker’ and less for the pitcher. The striker (the batter in todays’ games) had to step up to the plate and place their front foot on a line that ran through home plate to both strikers’ hitting area. The bat was much heavier than the version used today and needed much force to come through and make contact with the ball.

The gameplay of 19th century base ball was the most intriguing. To understand the modifications and improvements made by each generation to accommodate the players and fans of the respective eras is fascinating and addicting. Just like baseball played today, the rules and regulations made base ball a competitive sport to players and enjoyable enough for fans to watch. I was told once I played in this festival/tournament that I would want to come back annually and learn more about the game back then, and they were completely right.

Although all of the rules can be found on the 19th century base ball website, the following were a few that were most surprising. Some rules also vary from year to year. The pitcher must throw the ball underhanded and the arm must stay at a certain angle and most not be released above the waste. The arbitrator (umpire) issues warnings before ball and strikes. Some of the earlier years did not include balls. There are also ‘no calls’ for the balls that are too close to call. The striker can hit a foul ball, and it will not count towards a strike. When the striker hits a ball, he/she can be out by a ball that is caught, or also a ball that is caught off of one bound. This was certainly the most frustrating part as players would hit balls 350+ feet but the ball would be caught up to by the fielder and caught off the bound. Strikers cannot overrun first base, so sliding was imperative. The last rule that really changed things was tagging up. A runner didn’t have to tag up on a ball that was being caught on the bound. The rules do get tricky in different years though will a fair ball and a foul ball. There was also ‘free backs’ in some of the earlier years, allowing runners to run on any batted ball. Finally, at the end of each game, the captain of both teams offers a sincere gesture of gratitude towards the opponent, arbitrator and fans for taking their part in the game. They then chant a motto or symbolize their team in some way as a sign off.

19th century base ball is a nice outlet to modern day baseball if someone needed to step away from it for a little while. The concept still allows you to enjoy the sport, but allows for a person to educate themselves about America’s favorite pastime. 19th century base ball is growing and leagues and travel teams are increasing annually. Comcast SportsNet and HBO also filmed games of the festival, and HBO plans to produce a documentary on the history of baseball in the future.