For the second year in a row it became the spring that never was for Oscar Taveras. The Cardinals’ top prospect was sent to minor league camp on Thursday after only two appearances that consisted of six at-bats and one hit. It was a pump fake of a start to the season for Taveras, who entered camp with as much hype internally with the organization as he did with the fan base. Yet in the end (at the beginning), this spring failed to see the extreme potential of the 22 year old even pick up a glove. But the spring is all about seizing the opportunities that are presented, so who does his removal from the Opening Day picture benefit the most? 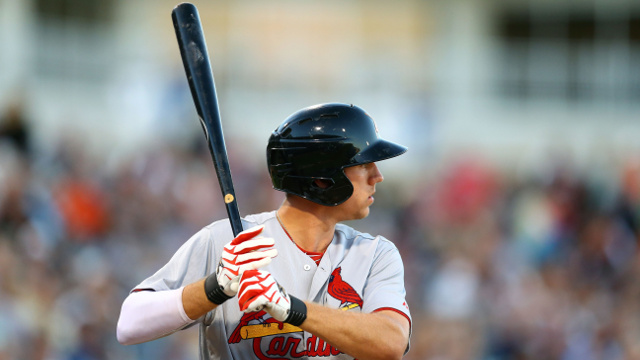 It was understood that it would be a slow start to the spring for Taveras, who spent the winter on the mend from a series of ankle injuries that ended his 2013 season after 46 on and off games. Yet it was the combination of a second injury to his hamstring that ultimately sidelined him again this spring, and made it pointless to keep him in the wait with the Major League team once Minors camp got up and going. Combined with the notion that he was not pushing himself as hard as the club may like to get out on the field despite his hindrances, and it is no surprise he is out of the picture for the time being.

However, the club is featuring a series of strong showings from its outfield candidates, especially from the minor leaguers that remain with the club. While Matt Holliday, Allen Craig, Peter Bourjos and John Jay are assured spots on the 25-man roster, there is the push for a final bench spot that could be up for an unexpected competition now.

The incumbent that would be assumed of the spot would be Shane Robinson, who is accustomed to the battles that come with being a fifth outfielder. He put up the best showing of any Cardinal last spring, and is having another strong campaign this year, hitting .316 over 10 games thus far. His versatility, defensive prowess and familiarity with the team work in his favor, and even with a healthy and producing Taveras, it seemed to be a bit of a stretch that he would take a part-time role from a player that is perfectly groomed for such a capacity as Robinson.

Randal Grichuk has showcased why he was an important part of the deal that sent David Freese to Anaheim, and has also had an encouraging spring, albeit one that will do more to find his place in his new system over place him in the big league picture for now. The same could be said for Xavier Scruggs, who has shown he is ready to be an everyday contributor in Memphis immediately as well.

However, of the young Cardinal prospects whom have made the biggest impact, Stephen Piscotty has stood out among all. The converted college infielder’s bat is what fuels his rise, and while he is learning on the run in right field, he is making the same type of impression at the plate that Matt Adams did a year ago—the type of impact that changed plans for the Opening Day roster and earned him a permanent stay.

On the spring, Piscotty has hit for a .333 average over a team-best 12 games, on seven hits, including two doubles, a triple and a home run, good  for six RBI and five runs scored himself. He is having the type of effort that opens eyes creates a permanent mark on the radar, and one that could see him force his issue onto the team much sooner that previously considered.

Numbers in the spring mean little in the big picture, and are erased nearly as quickly as they are recorded when the teams head north. But the impact that is made as they are created lasts permanently. And this spring’s indicators are showing that the script as written throughout the window should already be considered outdated.

One thought on “Who Stands To Gain From The Loss Of Taveras?”