As James Shields enters the final year of this contract, it’s likely he’ll become a free agent and sign with another team after the 2014 season. Sure, there’s an article from the Kansas City Star and an article from the Royals official website about Shield’s interest in staying with the team. But that’s standard boilerplate for a player entering the final year of his contract, so take it for what’s it’s worth. With that in mind, would it be a good idea to trade Shields before the July trade deadline and get some value out of him? 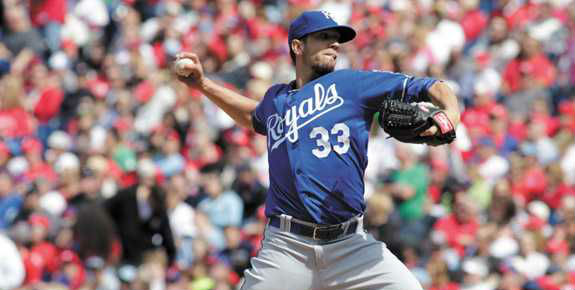 The obvious answer is yes if the Royals season falls apart and they’re out of the playoff hunt by late July. With his trade value, they have to get what they can and look ahead to 2015 and beyond. But what if the Royals are in the playoff hunt during the trade deadline? Would trading Shields be a good idea? Maybe, but some things would have to fall in place.

Obviously the Royals need to play well enough to be in the playoff hunt. Young hurlers Danny Duffy and Yordano Ventura need to step up and have great seasons. Jason Vargas, Jeremy Guthrie and Bruce Chen need to provide steady output and keep the Royals in games. That’s a lot of if’s, but the Royals could make do with a starting rotation without Shields. Yes, a starting rotation with Shields is better than one without him. But if the Royals believe they can get into the playoffs with Duffy, Ventura, Vargas, Guthrie and Chen, losing Shields to gain a controllable player or two might be worth it.

Let’s say there’s a team needing a top of the rotation starter for a playoff run, even if he’s a mid-season rental. They have a young pitcher in the Majors that’s a year or two away from being a breakout starter, but the team needs someone they can win with now and they’re open to trading their young hurler and maybe a minor league prospect or two. Is that a move the Royals would make, even if they’re in the playoff hunt and the rest of the rotation is pitching well? Would a young, controllable pitcher for a few years outweigh the August and September you get from Shields?

It’s a tough decision to make. Keeping Shields until the end of the season might get you in the playoffs, but he’s probably going to leave at the end of the season. If you trade Shields, the fan base may think the Royals are giving up and they’ll give up on the team. The safer path is to stay with Shields and see if they make the playoffs. But what if they don’t make the playoffs and Shields walks? The Shields/Myers trade detractors will say “I told you so” and the trade will look like a failure, especially if Wade Davis flames out.

Or do the Royals take a risk, trade Shields for a young, controllable pitcher and hope the rest of the rotation gets them in the playoffs? If the Royals make the playoffs, the fans and experts would laud it as a risky but brilliant move. But if the Royals don’t make the playoffs, then the Shields/Myers trade looks like a failure, at least for the short term. If the young pitcher they trade for becomes another Zack Greinke, it could pay off in the future. But if he flames out, then it’s another failed trade in Royals history.

Trading for Shields was a bold move and I believe Shields was one of the reasons the Royals finished above .500. Yes, having Myers would be nice, but getting Shields (and the performance of Ervin Santana) gave the starting rotation much needed stability and helped the Royals become an above .500 team and playoff contenders.

If Shields gets the Royals to playoff contention by late July and it’s apparent he’s leaving at the end of the season, it might be best to trade him. It’s very risky, but playoffs or not, Shields is probably going to leave. So why not get as much value as you can out of him? Whatever the Royals do, they have to make the playoffs this year or the season will be a disappointment. With or without James Shields.