The standard sized base set cards are really broken down into two different sets. The first set is a 100 card featuring current major league players. The cards are border-less and have a stylized graphic at the card bottom that includes the set name, player name and team. The card fronts also have a refractor like finish to them and are trimmed in the team primary color. The card backs are photo-less. The grey-scale reverse contains brief biographical information, moderate career highlights, career best and total statistics. The backs are also trimmed in the team primary color. The other set cards you will pull are the ‘Bowman Platinum Picks.’ These cards feature up and coming players and minor league stars. They are identical in design to the base set except for the card number prefix of ‘BPP.’

Base card front and back: 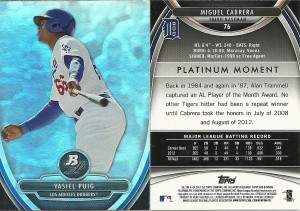 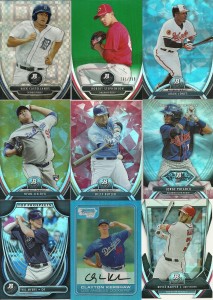 I really like the simple and clean design of 2013 Bowman Platinum. The autos are on card and really pop. I have two major complaints about this product however. As always, I feel that there are too many inserts cards. I would much rather get half the inserts and get that many more base cards. Also, as long as collectors keep demanding the latest hottest player in every card set and do not hold Topps accountable, Topps will continue to make redemption cards. I have only ever once gotten the card I was supposed to from a redemption card. Some of the cards also show evidence of the infamous ‘chrome-curl.’ Overall I really do like 2013 Bowman Platinum and can even get past the number of inserts, but redemption cards must go! That being said, buy a box and trade your Tigers cards to me!

The Bottom Line:
I give 2013 Bowman Platinum a buy rating. You will need at least two boxes and some trading to complete both sets. Prospectors will love this set!

Thanks to Topps for making this review possible!