Per box items:
36 packs per box
10 cards per pack
1 autograph or relic per box

The standard sized base set cards feature a full color action shot of the player. Bordered in white, the card fronts have the player name and team logo at the bottom. The card fronts are trimmed with the team’s primary color. The card backs are photo-less and are horizontal in design. The backs include moderate biographical information, a ‘career chase’ statistic, complete career statistics, and brief career highlights or a player quote. The backs are also trimmed with the team’s primary color.

Base card front and back: 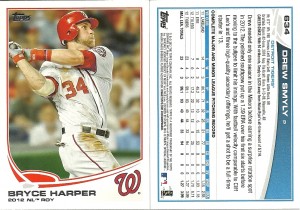 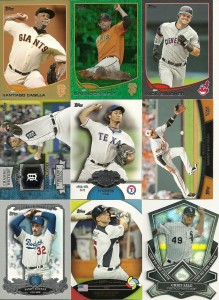 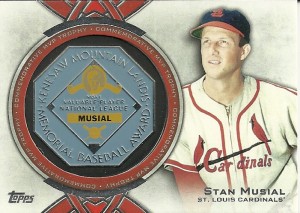 I really like the design of this year’s Topps cards. Series 2 cards are identical to Series 1 in design. The very simple clean design is very appealing. I think that the photography from Topps has really improved over the past couple of years. Topps again uses occasional horizontal card fronts when the shot dictates. Topps has issued several short prints cards of players. These alternate variations show the player making a great catch, with sunglasses or signing autographs. The Topps base set is again loaded with inserts and parallel sets. I would have liked to see a few less inserts to get that many more base set cards. That being said though it will not be difficult to complete the base set and some of the inserts look pretty cool! Buy a box and trade your Tigers, Rickey Henderson and WBC China cards to me!

The Bottom Line:
I give 2013 Topps Series 2 a buy rating. It will be very easy to complete a base set with a box, a few extra packs or some light trading. There are lots of inserts and parallels to chase.

Thanks to Topps for making this review possible!