In this week’s Triple Play, we look at some brilliant pitching performances, a future Hall of Famer nearing a major milestone, a recently traded pitcher acting like a fool and more (including our weekly Wainwright Walk Watch). Off we go:

Starting pitchers in both leagues

Have you noticed just how many ridiculously brilliant pitching performances there have been since the All-Star break? Jose Fernandez (more on him below). Francisco Liriano. Clayton Kershaw. David Price. Max Scherzer. Justin Masterson. Yu Darvish. I couldn’t narrow it down to a single “hottest” pitcher over the past week or two, so I’ll spotlight a handful of the best games, in no particular order:

If you are a fan of dominant pitching (as I am), these two weeks since the All-Star break have been a joy to watch. It’s no wonder that teams rarely trade pitchers anymore unless they overpay drastically.

Normally, this spot is reserved for a player who is struggling or not playing well. Saturday night, though, Garza displayed behavior so boorish, so idiotic, that he merits this spot for the week. Here’s the scenario: 1) Garza is a poor fielder; 2) normal third baseman Adrian Beltre was serving as the DH, and 3) second baseman Eric Sogard is a good bunter. This led to the A’s bunting four times, including Sogard’s perfectly executed suicide squeeze in the 7th inning that plated Oakland’s fourth run of the game. Solid strategy, right? Take advantage of another team’s weakness, especially when that team is a division rival trying to catch you. Garza barked at Sogard while walking off the field after the inning, but played it off after the game, saying he was asking if there were any good places to eat in Oakland. He added,”They showed me how they were going to play and how they were going to attack me, and that’s fine. Next time, I’ll be ready. That’s it.” It seemed to be done and over.

After the game, though, Garza went over the edge and started tweeting at Sogard and his wife, Kaycee: 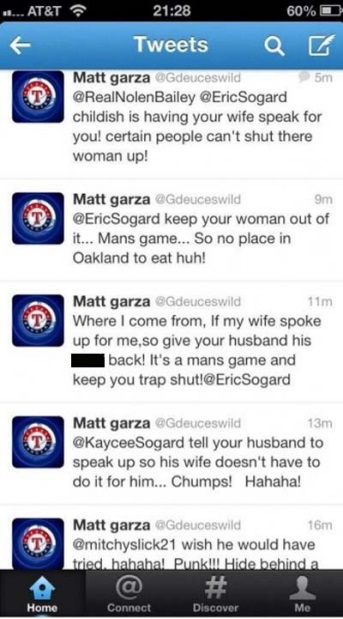 Where do you even start with this? Aside from being a sore loser and displaying repeated ignorance of basic grammar, you’re still left with the complete and utter disrespect of a player’s wife and of women in general. Man’s game? Some people can’t shut there [sic] women up? Seriously? I can understand being hyper-competitive and angry about a game, but how taking it to this level is pure misogynistic stupidity. And the half-hearted apology – “sorry I let my competitive edge out” – is laughable at best.

By the way, here’s what Kaycee Sogard tweeted that got the cement-headed Garza so riled up: “Get em on, get em over, get em in!” Some pretty controversial stuff there. To their credit, Sogard and his wife said they consider the whole matter a joke, which is a perfect response. Garza certainly made a laughingstock of himself Saturday night. He did issue a statement of apology yesterday, but it lacked sincerity and sounded like something his agent’s summer intern wrote for him. But, hey, I guess we should give him credit for not going with the “my Twitter was hacked” excuse. In any case, Garza wins the award for Neanderthal of the Week, and I dearly hope the A’s use the exact same tactics on him if they face off again this season.

Player A is Jhonny Peralta. Player B is Jose Iglesias, who will likely be replacing Peralta as Detroit’s everyday shortstop this week. If all the Biogenesis reports are true, then Peralta is staring at a 50-game suspension that will take him out of the lineup until late September. Under those circumstances, the Tigers traded outfield prospect Avisail Garcia and others as part of a three-team deal that also saw Jake Peavy go from the White Sox to the Red Sox. Most importantly for Detroit, though, is a quality replacement for Peralta. Iglesias may not have the power Peralta offers, but he is a FAR superior defender and has not been nearly as overmatched at the plate as some feared before the season. With Miguel Cabrera, Prince Fielder, Torii Hunter and Victor Martinez, the Tigers have enough offense to get by without Peralta’s bat. Thanks to the acquisition of Iglesias, their defense should actually improve, which will be to the benefit of their pitchers.

Player A is the Mariners’ Kendrys Morales since the All-Star break. Player B is Nate Schierholtz of the Cubs during that same time frame. Both players would have been perfect fits for the Pittsburgh Pirates. Morales could have taken over at first base, with Garrett Jones sliding back to right field. Schierholtz would have been a perfect platoon partner in right. Morales’ season totals of 17 homers, 63 RBI and 50 runs scored would rank 2nd for the Pirates, while Schierholtz’s ability to hammer right-handed pitching would have been an ideal fit for a team in need of that particular skill. Instead, though, Pittsburgh GM Neal Huntington failed to make any deals by the July 31 deadline. Any chance to acquire either player is likely gone. Although the Pirates took four of five in last week’s huge series against the Cardinals (and seized back first place in the process), fans are right to wonder if Huntington’s failure will come back to haunt the team before the end of the season.