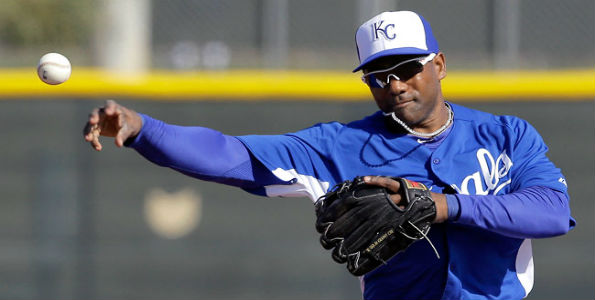 Miguel Tejada is towards the end of his career and is still producing at least at a marginal rate. Royals fans collectively groaned at the beginning of the year at the signing of the aging star, but so far this year he has hasn’t been a complete disaster. His slash is .278/.307/.371. His power is almost completely gone. He only has 2 homeruns this year. In both 2002 and 2004, he hit 34 homeruns. His ISO power is at .093. His power has basically be gone for a few years now.

But regardless, for a back-up and utility guy who occasionally starts, he has filled the role, even if it means playing slightly higher than replacement level. But more than what he is doing this year, I want to evaluate his career, and explore the idea that Royals fans are watching a possible Hall-of-Famer on the field.

I highly recommend the book Away Games: The Life and Time of a Latin Ballplayer by Marcos Breton and Jose Luis Villegas. It chronicles the rise of Latin ballplayers, but really puts an emphasis on Tejada. Just showing the struggles these players have with coming to a new country and trying to make it in the society much less in the big leagues will give you all the respect you could ever want for Tejada. Baseball is their ticket out of poverty and many Latin players spend almost every waking moment improving their skills on the field and have little time to learn English. So to come to the US and literally know no one and not speak the language is understandably difficult, but really brought to light in the book.

But there is one shortstop that Tejada has better much numbers than. That’s right, the one and only, John Montgomery Ward. I… literally have no idea who that is. Whoever he is, he has a slash of .275/.314/.341 and a career WAR of 39.5.

Reading his page on Wikipedia, I found out this John Montgomery Ward guy is fascinating. He was born in Pennsylvania in 1860. Before becoming a shortstop he was a pitcher and helped develop the curveball. While playing for the New York Gothams (later renamed the Giants, unfortunately, because the Gothams is the greatest name ever) he hurt his arm and then moved to shortstop. Along with playing baseball, he graduated from Columbia and helped develop the players’ union. After playing shortstop until he was 34, he retired from baseball and became a lawyer and supported the players’ union against the National League. He later became part owner of the Boston Braves. In 1964, he was voted into the HOF by the veterans committee. I should have written the article about this guy. He is incredible.

The biggest roadblock for Tejada though, is not his numbers, but rather his steroid use. Tejada was called out by several players including Jason Grimsley and Rafael Palmeiro. Palmeiro claimed to have failed his drug test due to a tainted B-12 shot given to him by Tejada. Jose Canseco called out Tejada as a user in his book. While being investigated, Tejada swore he never used PEDs. But in 2007, The Mitchell Report came out and identified as a player who had purchased PEDs. He was indicted of perjury in 2009 and gave a tearful confession that caused the court to go easy on him.

At least for the time being, with voters punishing players who used PEDs, Tejada will not make it into the Hall of Fame. If Bonds, who had a career WAR of 164.1, and Roger Clemens, who had a career WAR of 139.5, aren’t allowed in yet, I don’t see Tejada getting in any time soon. But there will eventually be a sea change at the Hall and someday Bonds and Clemens will probably get in. Will that include Tejada? Possibly. It would matter how big the change is, as his numbers do make a good argument.

So, as The Royals battle for .500 the rest of the year, which may lead to some frustrating days, keep in mind that you may be watching a Hall of Famer on the field. And that will help deal with any frustrations you have.

And then after the games, read more about John Montgomery Ward. That guy is incredible.