This is the time of year when we find out who the contenders and pretenders are. Does your team sell for prospects for next year? Or do they buy a player with pending free agency to be a hired gun for the last part of the season? In this fan’s case, the Tigers need to pick up an experienced closing pitcher.  As the season winds down, teams make roster moves to squeak out a few more wins. Or in some cases pick up an available player so a rival does not. If nothing else, trading players is the professional version of what many of us do everyday in trading cards.

In 1974 Topps introduced the first “Traded” cards. These cards highlighted players who switched teams throughout the season and pictured the player in the new team’s uniform. The cards were inserted in packs of both low and high series base cards. The cards had bold, block letters across the card front that read ‘TRADED.” Even though they were produced later in the year, these cards were produced in the same quantity as the regular base cards and are not considered any harder to obtain.

In 1981 Topps, and other card companies started making stand alone ‘traded’ sets. These sets varied in size, but the cards themselves could look very much like the regular base set card designs. Often the only thing to differentiate a base card from a ‘traded’ card would be a different picture and the numbering on the back. Each company had their own ‘traded’ set. There was Topps Traded, Fleer Update and Donruss “The Rookies.’ These sets not only included players who changed teams during the season, but also in-season call-ups of rookies. Companies would often race each other to produce the first card of a player who changed teams or the first true rookie card (RC) of a promising call-up.

Some of the more famous and valuable of these early traded/RC cards are of Hall of Fame quality players. 1982 Topps gave us the first RC card Cal Ripken Jr. 1984 Fleer Update is still a popular set with the first cards of Roger Clemens and Kirby Puckett. This week Bike Spokes and Shoe Boxes will look at some traded and update cards. 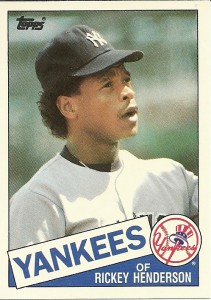 1985 Topps Traded Rickey Henderson. One of his first cards as a Yankee, this card is numbered 49T on the back. 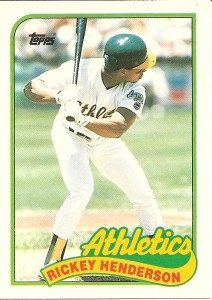 1989 Topps Traded Rickey Henderson. Headed back to the A’s, Rickey has the distinction of being the only other player in MLB history to be traded for the same player twice! He and Eric Pluck swapped spots on the Yank’s and A’s in 1985 and 1989. 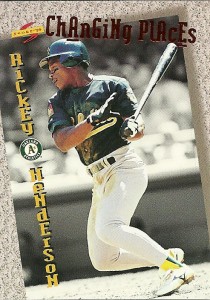 Actually an insert card from the 1994 Score Rookie/Traded set, this “Changing Places” card shows Rickey with starting his third stint with the A’s. 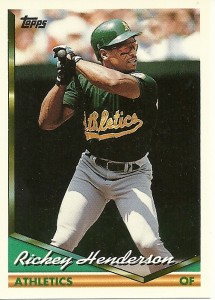 1994 Topps Traded has the same design as the regular cards, just a different picture and card number on back. 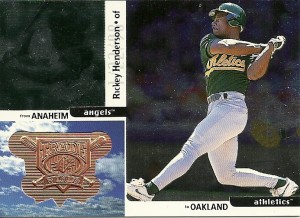 1998 Upper Deck SPx ‘Trade Winds’ sub-set card. Actually a regular base set card and one of my all-time favorite card designs shows Rickey embarking on his fourth tour of duty with the A’s.

Enjoy the thrill of the chase tracking down your favorite players who moved or your team’s new pick-ups this year with traded cards!