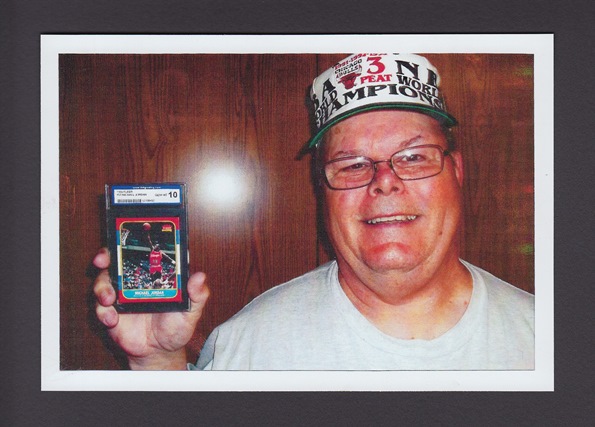 International Sports Authentication (www.ISAgrading.com) recently ran an unannounced contest to reward the customer who submitted the 100,000th card for grading.  The lucky customer, who won a 1986-87 Fleer Michael Jordan rookie graded an ISA 10 was a regular submitter, Gerald Chasm.  What makes Mr. Chasm winning the most iconic card of the best basketball player ever so special: the fact that he is in the process of collecting the entire 1986-87 Fleer Basketball set, and he actually needed the Jordan rookie card to help complete it!

Mr. Chasm has almost 70 cards of the legendary set, all graded either an ISA 8 or 9, but he has been unable to track down the Jordan rookie, or any card that is an ISA 10.  When asked what his reaction was to winning the card, Mr. Chasm initially thought that he had won Jordan’s baseball rookie card.  When he realized what he had actually won, he was floored!  Asked what his plans were once he completes the set, he said that he was unsure, but that his wife told him to “sell everything else and just keep that set!”

As a lifelong collector, Chasm began accumulating cards in 1954 and remembers playing Little League baseball when Mickey Mantle was a rookie.  He says that he has over 1 million total cards, with over 1,000 graded.  After retiring a couple of years ago, he is now active in online sports card auctions for supplemental income.

When asked what his favorite sport was, Gerald replied that he was a fan of them all, but that racing and baseball were his top two.  His favorite driver is Dale Earnhardt, Sr.  Growing up, he followed the Cubs and White Sox, and traded all of his Yankees cards for cards of his favorite teams.  As a youth he followed Minnie Minoso, Luke Appling, and Nellie Fox.  Besides Earnhardt , Sr., Gerald’s favorite modern athletes are Bo Jackson, Michael Jordan and Chipper Jones.

Gerald was also asked if he had any other family members who collected sports cards.  “I enjoy collecting with and for my grandson, and I got my father into card collecting,” he said. “My father was a huge Nolan Ryan collector.”

He went on to say that he “loves the customer service, pricing, turnaround time and grading consistency of ISA.”

International Sports Authentication is a sports card grading company located in Southeast Michigan.  For over four years, ISA has been specializing in grading and encapsulating all sport, non-sport, entertainment and collectable card game cards.  There are over 2,500 ISA graded cards available on eBay.  You can follow ISA Grading online on Facebook, Twitter and Tumbler.  For more information, you can contact ISA by phone at 1-800-309-7785, or by email at:Questions@isagrading.com.