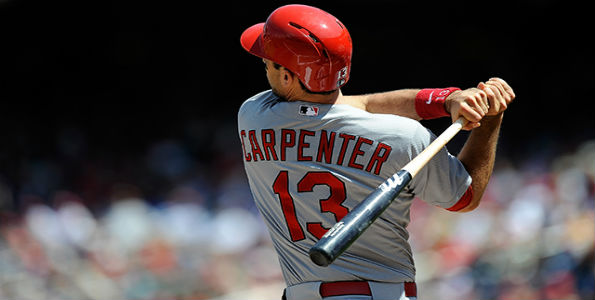 It’s official, the Matt Carpenter experience has worked. And having his bat in the lineup every day has helped the Cardinals go into the All Star Break with the best record in baseball.

Carpenter has ascended in the consciousness of fans, from becoming a utility player, to one of the best second basemen in the NL, and eventually on the All Star team. There is another step he needs to be considered for, an MVP candidate.

If the season was over today, would Carpenter deserve the MVP award? Possibly. Is he in the conversation? Absolutely. Can he win it? Yes. And for these reasons.

Carpenter is a darling of the stats crowd.

Carpenter takes a slight hit on wOBA, where he ranks 8th in the NL, which may undermine the fact he is 6th in on base. Also Carpenter’s ISO is under .200.

Regardless, Carpenter has the numbers to garner support from those in the sabermetrics community.

Carpenter has excelled at lead-off.

Matheny has brilliantly ignored any prototype of what a lead-off hitter is supposed to be. He has hit Carpenter lead-off, and Carpenter has excelled in that role. Derrick Goold pointed this out in the Post-Dispatch that even though Carpenter has an impressive slash of .320/.393/.499 on the season, he has an even more impressive slash in the lead-off role of .326/.417/.437. I’m not going to give any narratives that he has a special ability to excel in that role, but the truth remains, when given the lead-off role, he has filled in beyond expectations.

Carpenter could have the best second half of the season.

Along with that, he is 5th in batting avg in the NL (behind other players including Yadi and Craig for the Cardinals), he has a lower BABIP than any of them besides Posey. This shows a less amount of luck going his way which supports the hypothesis that he can maintain what he’s doing in the second half over his competition.

Though Carpenter is only on pace to hit 18 homeruns this year, and MLB hasn’t elected an MVP with that few of homeruns since Barry Larkin in 1995, Carpenter has traditions behind him. For instance, if the season was to end today, The Cards would be a playoff team. The old (and silly) unofficial rule that you have to be on a playoff team to win the MVP would eliminate much of the competition including David Wright and Buster Posey.

Hey it worked for Cabrera last year. The “moving to a new position to help his team” narrative can help him quite a bit. I’m in favor of eliminating that school of thought altogether, as you can either play a position well or not. And like Cabrera last year, if you don’t play the position well, you’re not exactly helping your team. But if any of these narratives can help cancel out other narratives, like homeruns mattering in spite of slugging, then I’m all for them crossing each other out.

Which brings us to Carpenter’s defense. He has been at the least serviceable at second base. He has a fielding runs above average of 2.1. He looks comfortable with his range and turning double plays.  He is an athlete, and a good one at that, and has taken very well to his new position.

Not bad for someone who was without a position last year.

One thought on “Can Matt Carpenter Win the MVP This Year?”