Welcome to the mid-summer classic, the brief time every season when records, standings and division rivalries are put aside. For a few special days in July both fans and players alike come together for the joy that is the Major League Baseball All-Star game.

MLB’s All-Star weekend provides a tremendous opportunity for collectors. The different activities surrounding the game are all great places for obtaining autographs and collectibles. Even players have admitted to wanting to get autographs from each other.

For as long as there has been an All-Star game, baseball card manufacturers have been making All-Star cards. These All-Star cards have come in different forms and styles. One popular way card companies highlight the annual event is by creating a ‘sub-set’ of All-Star cards in their regular set. These cards are considered base set cards and the set is not complete without them. Often the players are pictured in their All-Star uniforms, but the card will almost always have a special graphic designating them as All-Star cards. Another type of card to collect is All-Star insert cards. These special cards are randomly inserted into packs of regular cards. The inserts can have a different design from the base set cards, and usually have a much smaller print run and are a smaller set then the base set.

This week, Bike Spokes and Shoe Boxes will look at some different All-Star cards of my favorite player from the 1980’s and early 1990’s. 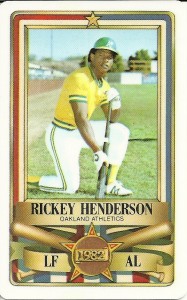 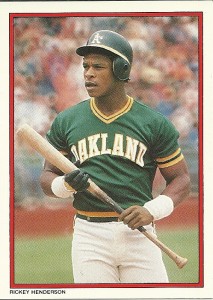 1984 Topps Glossy Send-in AS – These cards were obtained by sending in Topps card wrappers. 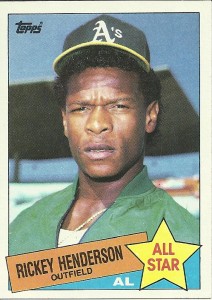 1985 Topps AS – Actually part of the base set, this sub-set features players from both the American and National League squads. 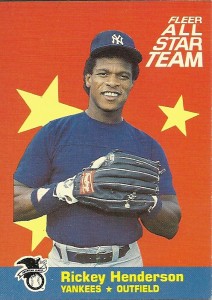 1986 Fleer AS – An early insert card, the Rickey Henderson card from this 12 card set is actually an uncorrected error card and has his name miss-spelled on the back. 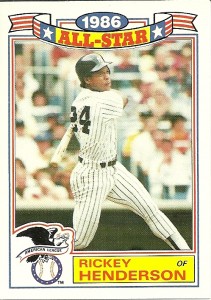 1987 Topps Glossy AS – Another early inert card featuring 22 players each form the American and National Leagues. 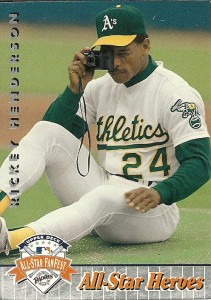 1992 Upper Deck FanFest – A 54 card set commemorating past present and future All-Stars of the game. There is a much rarer Gold Foil version. I have both, no, I am not a stalker. 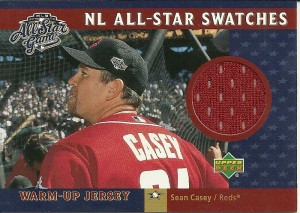 2002 Upper Deck All-Star Swatches – This is one of my favorite game used memorabilia cards.  There is nothing flashy or elaborate about it, but it shows that there are even All-Star relic cards to collect.

American League or National League fan, an easy way to start collecting and enjoy the sport more is with All-Star cards.