With the 4th of July upon us, we can find ourselves thinking what the holiday means and all of the activities available for us to participate in.  Most of the country will take part in parades, fireworks, cookout and of course America’s favorite past time, baseball. Either watching or playing, there is no denying that baseball is a part of American History.

While it is certainly possible to research what games have been played on the 4th of July, it is much harder to verify what photos for baseball cards were taken at those games. I decided to take a different approach and look for cards that were patriotic in theme. There has to be a reason why we have the phrase “as American as Baseball and mom’s apple pie,” right?

I was a little surprised to find how few patriotic cards I had, or least knew about. There are a lot of cards that have stars or banners on them. These are mostly All-Star cards or insert cards. This is not an exhaustive list by any means, however, I hope you enjoy Bike Spokes And Shoe Boxes visual salute to the 4th of July! 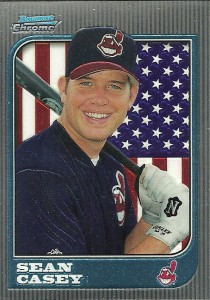 2002 Fleer base – Sean Casey
This is the back of card, the front has red and blue stripes, but the flag is more noticeable on the back. Plus I think it interesting that Sean Casey was born on July 2nd. 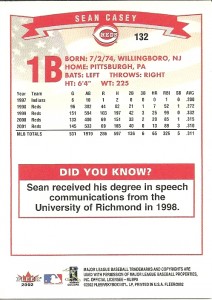 2002 Studio base – Rickey Henderson
Both Fleer and Studio whet with the flag theme for their 2002 releases as a tribute of sorts after the World trade center attack in 2001. 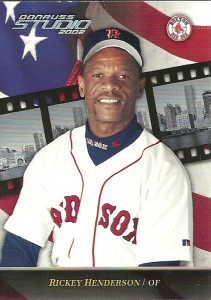 This picture was taken during Ortiz’s speech to the crowd at Fenway Park before the first home game after the Boston Marathon tragedy. 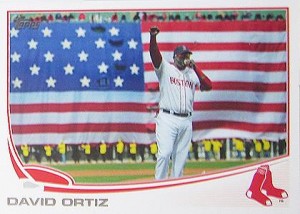 Other patriotic cards that I can think of include any Team USA cards and USA National Team from the 2009 and 2009 World Baseball Classic. The World baseball Classic cards have a graphic of the United States flag on them. If you have any cards that are patriotic please post them here to share and show your pride in the good ‘ole U.S of A.