I have always been flummoxed by Matt Holliday.

On one hand, there are the numbers. Those numbers tell me things like this: Holliday has compiled a park-adjusted OPS+ greater than 120 every season he has played since 2006. His average OPS+ of 137 is 12th among active players. In his 10-year career, Holliday has averaged 29 home runs, 109 RBI, 107 runs scored, and a .533 slugging average.

He has played over 150 games five times and is on pace to do it again – at age 33, when many players start to break down. But day in and day out, he’s out there, a reliable rock in the lineup for one of the better teams in baseball. Just this past Sunday night, he belted a grand slam in extra innings to help boost the Cardinals to a big win over Cincinnati.

When Albert Pujols left St. Louis after the 2011 World Championship season, the role of 3-hole hitter passed to Holliday. While he did not replicate Pujols’ numbers (and was not expected to), his usual numbers were right on target by season’s end. He was not out of place in that spot in the order.

In 2012, he hit the longest recorded home run at Busch Stadium III, a towering blast that sailed past the “Big Mac Land” sign into the second deck in left field. The bomb was estimated at 469 feet and was determined to be the fifth-longest home run hit by anyone the entire season. In August of that season, he got his 1,500 career hit.

That’s Matt Holliday – on one hand.

On the other hand, Matt Holliday is, without a doubt, one of the most infuriating players I have ever watched in my entire life. 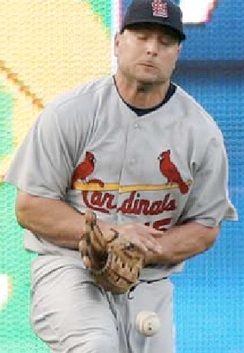 How about the botched pop-up in Game 6 of the 2011 World Series? Or getting picked off third base later in that same game? Gah! There was a bright side to the pickoff incident – he exited the game and set the stage for Allen Craig’s heroics later in Game 6 and again in Game 7. To this day, I remain convinced that the Rangers win the World Series in St. Louis if Holliday had stayed in the game. So I can let that one go much easier than 2009.

In last season’s NLCS, Holliday was Public Enemy #1 in San Francisco. His takeout slide against Marco Scutaro energized the listless Giants and they rallied to win Game 2 of the NLCS at home (thanks in no small part to another fielding error by Holliday). By the way, it was Scutaro who hit the ball that Holliday butchered, leading to a bases-clearing double. Karma came around in a BIG way that day.

Heck, Holliday even booted his first chance in the field, as a rookie left fielder for the Rockies in 2004 (in St. Louis, ironically). Watching him in the field was reminiscent of another Rockies left fielder, Dante Bichette. He was a productive hitter, at home mostly, and a butcher in the field. Some Rockies fans referred to him as “Skates” Bichette because his footwork often resembled an uncoordinated roller skater. The nickname suited Holliday as well. Every fly ball was an adventure.

His swing has never been described as a thing of beauty, either. The contrast between Pujols and Holliday in the 2009-11 seasons was fascinating. After watching watched Pujols’ balanced, powerful stroke, with that beautiful follow-through, Holliday’s violent, twisting swing would almost looked like he was throwing the bat at the ball, hoping to make contact. And some of the at-bats he takes….good grief, are they ever horrible. How many times over the years does it seem as though Holliday comes to the plate with runners in scoring position and the Cardinals in need of a run, and he grounds into an inning-ending double play or tap weakly to the pitcher? So frustrating (but to be fair, probably no more frequently than with any other player).

Even his baserunning wasn’t immune. Although he was a quarterback in high school in Oklahoma, he often ran the bases like a linebacker lumbering after a runaway QB. Rockies fans will forever remember his game-winning slide to end the 2007 play-in game against the Padres. His faceplant in the Coors Field dirt left a nasty red raspberry on his chin (and became a running joke the following season, when he lampooned it in a team commercial). You can still find Padres fans who insist Holliday never touched the plate on his “slide.” It became part of Holliday’s legend: the man could hit, but as a fielder and runner, well, he was a heck of a hitter.

After Holliday hired Scott Boras as his agent, it became apparent that the penny-pinching ownership of the Rockies were not interested in paying market price to keep him. Instead, they began quietly bad-mouthing Holliday to certain local media members who served as team mouthpieces. Before the 2009 season, Holliday was dealt to Oakland for a package of players that included Carlos Gonzalez. Then, at the trading deadline, the A’s flipped Holliday to the Cardinals. Like so many trade acquisitions before him, Holliday was sensational in his initial stint in a Cardinal uniform. Well, until that NLDS Game 2 disaster. That left a bitter taste in many a fan’s mouth (myself included, as I have mentioned).

Was Holliday worth the $100 million-plus contract Boras was demanding? Pujols was due to be a free after the 2011 season, and Adam Wainwright’s free agency loomed on the horizon as well. How would the Cardinals afford those guys if they gave a nine-figure deal to a guy who would probably end up as a DH? Many people (me included) had to pick up their jaws off the floor when the Cardinals signed him to a seven-year, $120 million deal. He’s not worth that much, I remember saying to anyone who would listen. They’ll regret this deal. Are they (Cardinals management) really ready to hitch their wagon to Holliday instead of Pujols?

We know how that one turned out, but I’ll get back to that in a moment.

As a teammate, I have never read or heard anything negative about Holliday. The Rockies’ attempted character assassination prior to trading Holliday failed. Instead, they came out looking like petty cheapskates who were afraid of Scott Boras. Through all the costly fielding blunders, Holliday’s teammates have defended him vigorously. Holliday drew the wrath of Giants fans (and a couple of blabbermouth ex-players like Will Clark), but Scutaro himself never spoke an angry word to the media about Holliday. He reminds me of Darryl Kile in the way he seems to be universally liked and respected by his peers. Holliday, meanwhile, quietly spoke after the game about how he has never intentionally injured someone and he expressed repeatedly expressed regret. As it turned out, Holliday had far more serious issues weighing on him at that moment.

In May, an article on MLB.com appeared about Kathy Holliday, Matt’s mother, being diagnosed with colon cancer in October 2012. The story (which was marvelously written by Jenifer Langosch) detailed how Matt got the 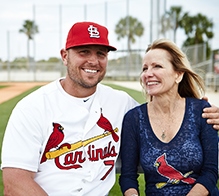 phone call while the Cardinals were battling Washington in the Division Series. While the Cardinals were playing the Giants in the NLCS, Holliday was also dealing with what must have been agonizing fear for his mom’s health. I can tell you first-hand that that kind of worry can be paralyzing and all-encompassing. You see, during that same month, my wife underwent a double mastectomy due to breast cancer. There were days I was able to go to work and do my job reasonably well, but there were also others where I was understandably preoccupied and, therefore, unproductive. My job doesn’t involve anything approximating the pressure of October baseball. Holliday didn’t play very well, but in my mind, the fact that Holliday was able to take the field at all in front of millions of TV viewers is pretty damned remarkable.

Holliday was nominated by the Rockies in 2007 for the Roberto Clemente Award, given to a player who best exemplifies community involvement in addition to his contributions to his team (aside: Holliday was robbed of the MVP award that year). They don’t nominate jerks for that award. In addition to his charitable work in the Denver area, he has an extensive history of doing good things since moving to St. Louis, including Homers for Health (with teammate David Freese) in 2012, the Make-A-Wish Foundation, and others. He doesn’t always come off well in TV interviews, but so what? Albert Pujols often looked like a surly drudge during interviews and few people cared about that. If Holliday treated fans or teammates that way, then it would bother me. So he doesn’t get enthused about yet another round of pre or post-game interviews; I probably wouldn’t, either. Big deal.

Let’s get back to some numbers: specifically, the $120 million-dollar contract Holliday signed before the 2010 season. After making $16.3 million in 2011-12, he will receive $17 million for the remaining five years. Let’s look at what Fangraphs has determined his actual value to be thus far:

So, to answer my question from above: yes, team management knew what it was doing when they signed Holliday. The decision to let Pujols go a year later was a completely separate matter (and even more wisely handled). Holliday has been everything the Cardinals could have expected – a durable, productive player who handles himself with class on and off the field. In case you’re wondering, my choice at the time for an outfielder was Jason Bay. He had been traded from Pittsburgh to Boston at the 2008 trade deadline and put up a sensational 36-119-103 season with a 134 OPS+ for the Red Sox in 2009. I was convinced that he would come cheaper than Holliday, yet be nearly as productive. How’d that work out? Well, in his three years with the Mets, Bay was worth a COMBINED $2.8 million (including negative $4.4 million in 2012). Obviously, I was 100% wrong. But so were the Mets and many national baseball analysts, so that’s some consolation.

Compared to other sluggers (Pujols, Josh Hamilton, Ryan Howard), Holliday has been a bargain. Often, a bargain comes with some sort of caveat (“it wasn’t the exact color I wanted, but the price was so good”). With him, the caveat is that he will botch plays in the field or take a terrible at-bat at a bad time. But, as he has repeatedly proven over the years, he will deliver the numbers by season’s end. He is not irreplaceable, but he is reliable. In sports today, I think that’s good enough.

I wonder how much longer he can keep this up. Time will tell, of course, but he has already defied my expectations. As for the rest of it, I am no longer flummoxed. Maybe it’s because of that ugly C-word that was affecting his personal life and mine at the same time. Maybe he’s the same person/player he has always been and it’s me who has changed. I don’t know. Whatever the case, I have gradually become a fan of Matt Holliday, as a player, but even more so as a person. I reserve the right to mutter a profanity or two when he makes a bad error or bounces into a rally-killing double play, but I would do that regardless of the player. He’s become one of the guys I root for, instead of that guy who plays with the guys I root for. And the best part (at least to me)?

His mom is in remission, as is my wife. Maybe that’s all the reason I need.