No big-league pitcher has won more games than St. Louis Cardinals right-handed starter Lance Lynn in the past year-and-a-half, but that doesn’t mean Lynn has been the best pitcher in that time period. 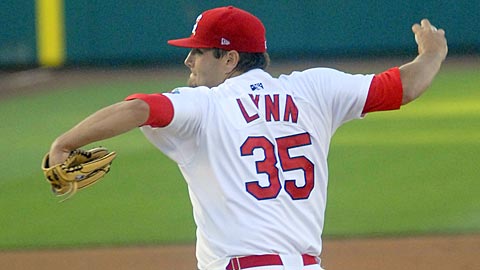 Far from it, actually.

Lynn won his 26th game since the beginning of the 2012 season with a one-run, five-hit performance through seven innings Monday against the Arizona Diamondbacks at Busch Stadium.

Yes, Lynn gave up just one run, but the Cardinals scored four runs in the first four innings, and seven in the first six, to give Lynn a comfortable margin by the time he faced the Diamondbacks hitters for a second and third time in the 7-1 victory.

And that’s been the theme of Lynn’s career.

Lynn was an All-Star in 2012 when he started the season with 10 wins in his first 13 starts. However, the Cardinals offense provided him four runs or more in all but one of those wins. That outlier game was a 1-0 win June 13 over the Chicago White Sox in Lynn’s most impressive start of the season: 7.1 innings, three hits and 12 strikeouts.

Otherwise, Lynn got to hide behind ample run support, even as he allowed three or more runs in seven of those first 13 starts.

With that said, Lynn is a good pitcher, no doubt. He posted a 2.42 earned-run average in those first 13 starts of 2012, but it ballooned to 3.41 by the All-Star break as he tired in the summer heat. Lynn finished 18-7 for the season with a 3.78 ERA, which ranked fourth among the seven regular starting pitchers the Cardinals used throughout the season.

Lynn was nearly a 20-game winner, but he also nearly gave up an average of four runs per game. Thankfully for him, the Cardinals scored an average of 6.06 runs in his starts, the most runs support any pitcher received in 2012. Perhaps that’s why he didn’t receive any Cy Young award consideration even though only five pitchers in Major League Baseball had more wins.

But he won games nonetheless, and he has carried that formula into 2013. Through 12 starts, the Cardinals have averaged 5.89 runs per game and have scored fewer than four runs just once.

Lynn has received the fifth-most run support of any starter in baseball so far this season, and his record reflects the help his offense has provided. He is 8-1, and that loss was the only time the Cardinals scored fewer than four runs, a 2-1 loss May 7 to the Chicago Cubs at Wrigley Field.

Perhaps Lynn’s spot in the rotation helps. The Cardinals have primarily slotted him in the third or fourth spot, which means he usually doesn’t pitch opposite of one of the opponent’s top pitchers. Therefore, the fourth-ranked Cardinals offense can feast on lesser pitchers while Lynn cruises through quality start after quality start. He has 25 of those in his 43 career starts.

Lynn’s 2.76 ERA this season is certainly good, and he deserves to be in the discussion as one of the best pitchers so far in 2013, but 20 pitchers have a lower ERA, and all but seven of those pitchers have fewer than seven wins. Patrick Corbin of the Diamondbacks is the only one to have more wins (nine) and a lower ERA (2.06).

So Lynn’s stats that will likely get him selected to his second All-Star team in as many seasons are deceiving, but that doesn’t matter to the Cardinals, which are 9-3 in his starts this season.

Lynn wins, and in the end, that’s all that matters.