Kansas City Royals fans woke up to an exciting email in their inbox today, they had been given the opportunity to purchase Opening Day tickets.  Once they opened the email, frustration set in very quickly.

The subject line of the email gave fans reason to get fired up, it read “Your Royals Opening Day Ticket Opportunity”.  Many fans had signed up recently for the opportunity to purchase tickets to the Royals home opener and most jumped quickly to the assumption that their name had been drawn in that regard.

Unfortunately, the subject line did not match the body of the email.  As overjoyed fans opened the email to see what they needed to do to ensure their seat at the home opener, they found the following text: 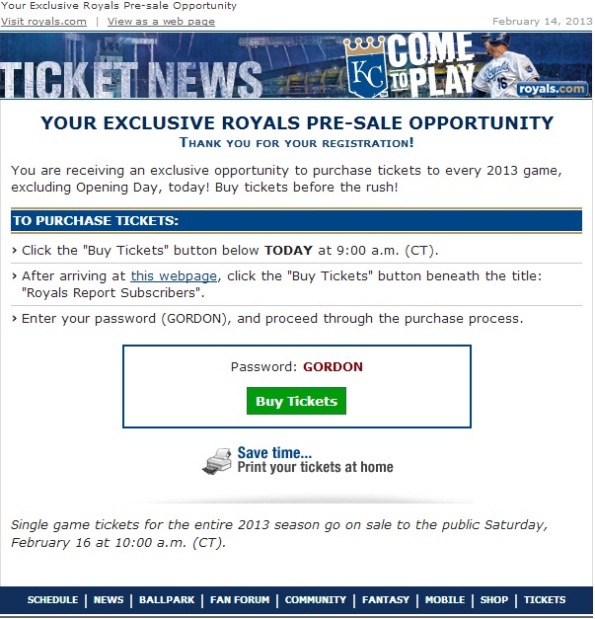 “You are receiving an exclusive opportunity to purchase tickets to every 2013 game, excluding Opening Day, today! Buy tickets before the rush!”

Fans have taken to social media with their displeasure with the club over what some are calling a “bait and switch” tactic.  Many felt slighted and wondered how the club could provide an email with such a glaring oversight.  Many seem to feel this is “par for the course” with the Royals business over the last few seasons.

There is a lot of excitement around the Royals going into 2013.  The team should take notice and make sure they are not coming across as “the same old Royals”.