Without rushing to judgment or burying a guy too early, time to face facts:  the future in regards to competitive baseball is not looking too promising for Chris Carpenter. With a re-occurrence of the nerve injury that kept him sidelined for much of 2012, the future of the 37-year old pitcher looks to not contain much more active baseball. 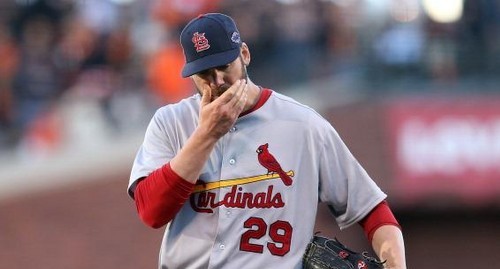 Some of the focus has inevitably shifted away from Carpenter, and to how the St. Louis Cardinals will try to fill the void he will leave in the rotation. There still looms the actual gravity of that situation. Unlike last year, there isn’t the hope of one of the game’s most domineering presences looming, waiting to reinsert himself in the mid-season fray. This was arguably what Carpenter’s biggest impression on the 2012 season was, and eventually became last summer. But that’s gone now, and from all impressions, what’s here now is what you get.

However, that’s not necessarily a totally bad thing. What won’t be possible to do is replace what he epitomizes, but from the standpoint having the talent on hand to deal with such a blow, perhaps no team is better equipped. The great strength of the Cardinals organization is young, power arms. This sudden opening creates another opening for that stockpile to be more widely featured in the Major League starting rotation.

But there will be ripple effect that goes into play, and many different actors will see themselves up more high leverage roles in the rotation, and ultimately throughout the season. Who fits in best, and where? Adam Wainwright will be the anchor atop the rotation, while Jake Westbrook will stabilize the backend as the fourth starter, but nothing less than everything changed everywhere else today. Here’s the potential impact, and new calling, the loss of Carpenter could carry for each of his young potential heirs.

Lance Lynn: He goes from competing for the fifth starter role to most the most qualified to directly take Carpenter’s place as the #2 starter. His 18-win, All-Star campaign from a year ago looks much better on paper than it played out in real time, but he represents the best combination of experience and top-end stuff to fill the role. He averaged 9.3 strikeouts per nine innings, but will have to pitch more efficiently and self-reliantly than he did a year ago to be a true asset in the role (11-0 with six or more runs scored, 6-5 with 5 or less).

Jaime Garcia: Who know s what to call from the sole lefty starting option in the rotation. That feature alone makes him very valuable, but the need for him in the midst of the rotation is offset by the tough truths of his situation. His shoulder health is static, and even when he’s healthy, it’s tough to call what he will offer. He’s given up over nine hits per nine innings the last two years, with a steadily rising ERA. He fits the profile of a solid middle of the rotation starter, winning 13 games in both 2010 and ’11, but if he’s not healthy, yet another question remains. A question that could potentially open up another door, for the most intriguing group of arms in the equation.

Shelby Miller/Trevor Rosenthal/Joe Kelly: And then, there were three. The race for the last spot in the rotation gets easier to pick out with Lynn ascending up the rotation. The decision still will be very difficult, with each representing a different quality. Kelly is the most experienced starter of the group, but Miller and Rosenthal are the more heralded talents of the trio.

This decision could set into motion much of the direction of the team throughout the season. There is next to no chance that Miller works out of the bullpen; he would be sent back to Memphis to continuing starting if he doesn’t win a spot with St. Louis. However, Rosenthal and Kelly have experience in both capacities, and could be immediate assets in the bullpen from Opening Day on. However, due to roster logistics, more likely than not one goes back to the Minors as a starter, one stays on in the bullpen.

How that plays out, anybody knows at this point. But there will be a gain, by yesterday’s unfortunate subtraction somewhere soon.