The talk of the St. Louis Cardinals’ offseason has been the strength of its pitching staff. A particularly exciting component is the potential of the bullpen, which has a chance to be amongst the best in all of baseball. However, there has been one part of the equation that has largely gone unconsidered in most discussion, and this is Fernando Salas. It is a pivotal season for the up and down Salas, and he has potentially as tough of a future to determine as any arm on the roster. 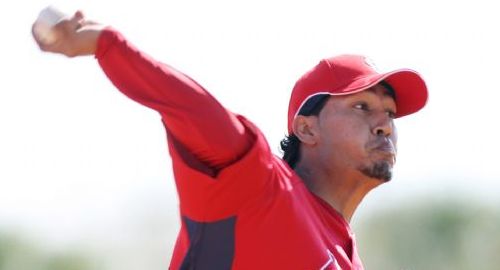 Salas has truly been a jack of bullpen trades since breaking in with the club in 2010. From spot reliever, to set-up man, to a closer who at once, led an eventual World Series Champion team in saves, to a seldom used long-reliever in the course of three months, he’s seen it all, fast. And that leaves him uniquely equipped for a role on the evolving bullpen of the 2013 Cardinals. But where does he best fit in, if at all?

One thing for certain is that a late game role is unlikely. With Jason Motte putting the clamps down on the ninth innings, and the seventh-to-eight inning sequence locked down between Edward Mujica and Mitchell Boggs in the lead roles, with Randy Choate and potentially Trevor Rosenthal on hand as well to add some variety. Earlier on in the game, Marc Rzepczynski would be in the mix, but it this is where Salas has been fit into, the hybrid of “if needed” as bridge/spot reliever. That’s a tough place to sit at, and is very circumstantial to being overtaken by the desire to have another arm in the mix as well, such one of the losers of the battle for the fifth starter, such as Joe Kelly or Lance Lynn. Both would be higher caliber arms, and fit into the role of a prototypical long reliever better.

In all actuality, injury may be his ally. It’s an ugly truth, but it’s an ultimate one in the course of the year: guys get hurt. And this is where Salas’ most valuable asset, his versatility, pays off the most. He can fill in at any level of the pen if the depth is rocked, or the young arms have adjustment issues. The kicker is, he’s far less effective early in games as opposed to late. In his career, the disparity in opponent’s batting average in the sixth and seventh innings (.304 and .276 respectively) in comparison to the eighth and ninth (.188 and .196), yet the backbreaker is that he’s given up 11 of his 14 career home runs in the final two frames. So the gift comes with the curse.

The Cardinals’ ultimate enigma sits in a very fitting place for himself. If there is anybody that could benefit from showing up to Jupiter and looking a lot better than anybody expects, it’s him. For the team, yet another great, battle tested arm to put to use is the best kind of problem to have. But for Salas, he’s a fish that’s swam in many types of water, but risks finding himself out of it completely if can’t find a middle ground. But if he intends to hold some sort of ground in the battle for a spot in this year’s bullpen from day one, he better get accustomed to shooting early and often.