All the debate is over and the Baseball Writers Association of America (BBWAA) has decided for the eighth time in history to not induct a player into the Hall Of Fame.

But did the message come across loud and clear?

The message here is that the hallowed halls of Cooperstown will recognize achievements by players that did not cheat or were not suspected of cheating.  In order to get that message across beyond a shadow of a doubt, the writers will need to show that the players on the other end of the spectrum, those that are not suspected of use in any way but are statistically qualified for consideration, are voted in quickly. 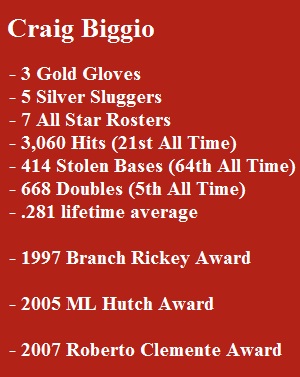 I present to you Craig Biggio.

Many assumed that Biggio would find his way into the Hall this year.  The statistics back up the normal mindset of voters, he was a historic player on his team and in his league.

Biggio’s career was worthy of the Hall Of Fame.  On top of that, he was never connected to performance enhancing drugs.  There are no rumors that he might have taken steroids.  He does not appear to fail the “eyeball test” suggesting that he got larger.  Biggio appears to be a guy that played the game the right way for more than 20 years of his life.  He is generally well liked among teammates, opponents, fans and the media.  He changed positions multiple times to better fit his team’s needs.  He spent his entire career with one team in an era where the almighty dollar has lured almost anyone away from the thought of doing that.  He is viewed by many as one of the best players to ever wear the Houston Astros uniform.

If the BBWAA wanted to send a clear and sound message to all of those suspected of steroid use, they had the perfect opportunity with Craig Biggio.

They had the perfect chance to induct a player that played the game the right way.

Biggio will be in the Hall Of Fame.  There is no doubt about that.

He deserved to go in on his first ballot.