It has been 10 years since we were all shocked to find out that Darryl Kile had passed away, in his sleep, in a hotel in Chicago.  The St. Louis Cardinals lost another member of the “family”, players lost a teammate, and the world lost an amazing man and father.

All of this is well documented and I do not feel I can bring more to the subject.  I admired him.  I enjoyed his career.  I mourned his loss.  I, much like other fans and pundits, have moved on.  Sooner or later you simply run out of words.

About a month ago, I was co-hosting a radio program on my network, pinch hitting for a host that could not make it.   The show featured former Cardinal reliever Dave Veres, a guy I had watched as I grew up and I was excited to interview.  Before the interview was over, the subject of Darryl Kile was raised, and I could tell there was a bond.

When the United Cardinal Bloggers decided that the June project this year should be to look back at Jack Buck and the man many of us now know as “DK57”, I was not sure what to write.  I sent a few emails and some requests but ultimately was denied or met the common “I’m not sure what more I can say”.  My email to Dave Veres, however, was answered kindly.

I did reach out to former Cardinal beat reporter, Matthew Leach, for his thoughts.  He told me that he would be running them on his blog, but he did not have a “favorite memory” of Darryl Kile.  Leach has said many times that Kile was “hard to cover” and explained why.  He did come up with a memory, and you can read that story over at Obviously, You’re Not A Golfer.

I asked Veres two questions: 1 – what is your favorite memory, on or off the field, of Darryl Kile and 2 – What can you tell me about that fateful day ten years ago.  What I got back but funny, beautiful, inspiring and sad. 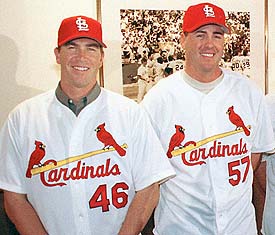 the winter together with our wives and kids being so close.

One was when we were in AAA with Tucson and I think we were playing Tacoma and we would go fishing in the mornings. So one morning we are out and being in the Northwest they had plenty of rain, so we were hiking back to get to a fishing hole and instead of going through a couple inches of water I decided to go across a muddy area instead because I didn’t want to get my shoes wet. Well, needless to say, what looked like a little bit of mud turned out to be about a 4 foot mud hole. I remember as I was sinking and was asking Darryl to help. He basically said “I’m not going in there”.  Luckily, for my sake, I finally hit the bottom. Then he held out his fishing pole for me to grab onto. Of course then it was funny and, needless to say, I went into the water anyway to rinse of the mud.

So, now we are in the big leagues and both live in Houston and Darryl and I would golf or play “mortal combat” and the wives would go shop or whatever. Of course it was only fitting that they were both pregnant at the same time, too. So on Jan 15th 1997 my wife and I are going to the dentist and I get a call from Darryl and he says he and Flynn are going to the hospital and wants me to go by the store and pick up a camcorder so they can record it. Nothing like going into your best friend’s wife’s room and setting up a video as she’s getting ready to give birth to twins. Thank goodness since it was twins and a high risk delivery there were plenty of doctors in there.  I could set up without having to “see” anything. Later that evening we are at home and my wife is feeling some labor pains, I think it’s just because she watched Flynn deliver. Well about 8 hours after their twins were born we had our daughter. And when Darryl signed with the Rockies the next year they traded for me a few weeks later and we all moved to Denver. So we spent nearly every Christmas and birthday’s together for the 4 years.

On June 22, 2002 – The day Darryl Kile was found in his hotel room
Well, I can say that morning may be the worst day I have ever been through. Since Darryl and I usually lockered by each other and he was always one of the first guys at the clubhouse, it was pretty clear when I arrived at the ball park he wasn’t there yet. So I tried calling him and, when I couldn’t reach him, I called my wife to go to his room and try and wake him up. I knew his brother came to town and just figured he over slept. So she banged on his door and there was no answer.  So she asked one of the maids to open the door since he was late for the game. Luckily for my wife’s sake he had the security latch on,otherwise she would have found him. But, that’s when we knew he was in his room. So they had to get security and I think they called the Cardinals and let them know something was up. As we were out at BP the clubhouse guys came and got me and said there was a “family emergency”.  It was my wife on the phone and told me that Darryl had passed away in his sleep. I didn’t know what to do or say,I just kind of went numb or in a daze. A little while later Tony came in with the team and that’s when they told everyone else.

Those next few days were so exhausting. The emotional drain on us, if anyone watched the game the next day against the cubs on ESPN it was like a bunch of zombies. I’m not really sure why they aired that game. I think being a father my first thoughts went out to Flynn and the kids,I couldn’t imagine them not having their father any longer.

I still think about him pretty much daily, usually a DK or 57 will pop up or a story will remind me of him. We ran into Flynn and the kids last year in Anaheim at a volleyball tournament that our girls were playing in. Even though we don’t talk as much it was still we hadn’t missed a beat when we saw them,except there was no Darryl in person.

We appreciate Dave sharing such personal stories with us.  After the stories, he included one quote that stuck with me:

He was truly one of the nicest and genuine people you could have ever had the privilege to know. Also one of the greatest competitors, I don’t think he missed a start in 10 years,so that why when Tony got us together and we realized that Sunday night game would have been Darryl’s start,we needed to play it in his honor.

Bill Ivie is the editor here at I-70 Baseball
He is the host of I-70 Radio, hosted every week on BlogTalkRadio.
Follow him on Twitter here.