“I love it when a plan comes together” – John “Hannibal” Smith

Two weeks ago I decided to write today’s article about the city of St Louis, their baseball team, and their unbearable fans. I spent countless hours researching, and remembering, all the things I dislike about this pompous trinity and was just beginning to feel prepared as I settled in to watch Friday night’s game. Less than 4 hours later, the best fans in baseball gave me all the ammunition I would have ever needed.

I should have seen it coming. You see I had developed a theory that determines how much you hate the Cardinal Nation, and Friday night’s experience just proved it. The theory basically states that hatred of the Cardinals begins with a person’s decency and is positively correlated with how much exposure you have to their fans. In other words, the more you get to know them, the more you hate them…and Friday night was a window into their souls.

Cardinals fans are, at their core, spoiled little brats. They’re the kid you hated in high school because he drove a brand new BMW, wore Abercrombie and Fitch to school every day, and always had that smirk on his face like he knew something that you didn’t. Everything in life was so easy for him. The hot chicks adored him because of his car, he never got in trouble because of daddy’s money, and he certainly wasn’t working a job in the summer. Remember how that kid acted when he something didn’t go his way? He threw a fit, just like Cardinals fans did Friday night. Remember how he acted when someone had a great accomplishment? He tried to diminish it, just like Cardinals fans did when Johan Santana no-hit them a couple of weeks ago. And if that didn’t work? Well then, he generally went off his rocker, like sending death threats to the family of an umpire because he had the audacity to blow a call.

The thing I always hated the most about that kid was that he actually thought we were all jealous of him, and of course so do Cardinals fans. They self-gloss with the ”best fans in baseball” tag, they talk about their 11 World Series rings any time you dare to question them, and most of all they love to act like they don’t give a damn about the Kansas City Royals because that would be beneath them.

Much like the rich kid, they’re just over compensating for their obvious shortcomings. I mean, c’mon they live in one of the dirtiest, most crime riddled cities in America. It’s no wonder they flock to the K every year, who wouldn’t want to get out of that abyss for a few days? I think the city of St Louis wanted to be Chicago but could only duplicate the crime and pollution. They like to compare their barbecue toKansas City, but the fact that they consume more sauce per capita than any city in the country tells me they probably aren’t very good at cooking their meat either. Maybe their team is a divine gift after all, to make up for how terrible every other aspect of life is in that cesspool.

Of course, Cardinals fans aren’t just making up for the inadequacies of their city, they have some of their own. For one, they are incredibly hypocritical. Their love and adoration of Mark McGwire as he injected his way to the home run record was sickening in itself. It became more so when it was replaced by indignant cries as Barry Bonds did the same thing, only better. Finally, when McGwire finally came clean, they no longer seemed to have a problem with steroids, as long as you admit it. So using the moral compass of the Cardinals, it seems that cheating is fine, drunk driving is to be revered, but human error from umpires is intolerable. I guess I shouldn’t be too surprised, these are the same people who cheered on Leonard Little long after his conviction for manslaughter.

Another thing the “best fans in baseball” pride themselves in is their knowledge of the game. That’s why I found it odd watching last night and hearing the roar of the crowd when Matt Holliday hit a can of corn to Jarrod 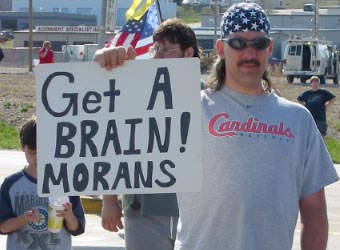 Dyson in medium-depth center field. Maybe their knowledge doesn’t include depth perception. Surely, though they stood and applauded when Alcides Escobar made one of the best plays the brilliant shortstop has ever made, right? Well, they were standing, but that’s because many of them were on their way out of the stadium…before the final out. I obviously don’t understand what makes a good baseball fan.

Now I mentioned the trinity at the beginning of this article, and I haven’t spent any time at all on the team. Honestly, before last night I didn’t have many feelings about this team. They’ve been ravaged by injury much of the season and at this point it appears to be a pretty mediocre collection of scrappy players and nearly has-beens. Of course, that’s generally good enough to win in the inferior league, but with no Albert Pujols to lead the way it won’t be this year. In fact, another Royals win tonight combined with a Reds and Dodgers victory would put the Royals closer to first place than the Cardinals, I wonder what the “best fans in baseball” would think of that?

6 thoughts on “I hate your face, St Louis”