For the first time this season, I will be in attendance for a St. Louis Cardinals game at Busch Stadium.

This Sunday, April 29, the Cardinals will take on division rival Milwaukee and I will be in attendance with a group of school kids and Angela Weinhold.  Why should you care?  Well that is simple.

Last year I started a tradition of carrying a messenger bag with me to all games that I was in attendance for.  You see, over the course of the almost two years that we have run the site, I have collected a fair amount of items that have been given to the site in one form or another for means of promotion.

Books, t-shirts, can coolers, and many more products have been sent in to the site to give away at various events.  Companies ranging from RinaWear Clothing company to Fox Sports Midwest have asked us to distribute cool gifts on their behalf, and we have happily obliged.  So before each game, I fill my bag with as much as it will hold and reward anyone who happens to come up to me and either recognize me or identify i70baseball.com with something from it.

This year, it gets better.

On Sunday, if you recognize me and mention i70baseball.com, I will have my normal bag of fan-centric stuff to reward you with.  If you are one of the first to come up to me, however, you are in for a treat.  In my bag this weekend will be one each of the following: 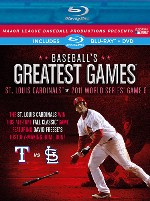 “But, Bill”, you say, “Game Six was outstanding, but there was so much more to the World Series than just that game.”  You’re right, my friends.  Because of that, I will also have a box set of the entire World Series, also from A&E Entertainment.  This set is a massive eight discs and contains every game from the World Series and a ton of extras. 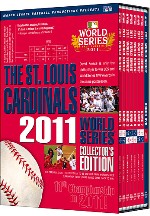 I will have plenty more to give away at the game Sunday.

– Follow me on Twitter (@poisonwilliam) as I will tweet updates on my location, my attire, and pictures to help you find me easier
– Find me at the game on Sunday
– Mention that you read i70baseball

See you at the ballpark!

Bill Ivie is the editor here at I-70 Baseball
He is the host of I-70 Radio, hosted every week on BlogTalkRadio.
Follow him on Twitter here.