Before I get to the schedule breakdown I’d like to digress.

A year ago Bill Ivie Jr sent me a direct message on Twitter asking if I would like to write about the Kansas City Royals for a website called I70 Baseball. I guess he thought I might know something about the Royals based on my tweets. I didn’t have any writing experience beyond tweets and Facebook statuses. I figured I’d write something, send it to Bill, and see what happens. After all, knowing how to cook makes you chef like knowing how to write makes you an author…..ok, at least a blogger.

I’ll be the first to admit that after a calendar year, 49 posts here at I70 Baseball, over 80 posts at my own blog, (I don’t update as much as I’d like.) that I still have a lot to learn about the English language and blogging. However, I think I’ve figured out the hard part: Just sticking with it. Most bloggers don’t get paid to do what they do. They do it because they enjoy it. I’m established in my career, have other obligations that are more important than the Royals, sports in general, or blogging. I have eclectic interests and will admit that my biggest weakness is staying focused on one hobby. During the first part of this month I had to be honest with myself on whether I enjoyed blogging enough to continue.

Since I’ve written this much you might have guessed that I’ve decided to continue. I know there are a lot of other people just like me who have lots of things going on and that sports is their primary form of entertainment. So much so, that there is this constant battle between their reality, and their love of the sports world; whether it’s rational or not. As you can tell this battle fascinates me. I doubt I’ll ever become a part of traditional sports media. That means I’ll never, or will rarely, have access to athletes, locker-rooms, front office personnel, or have sources. I’m not going to pretend to be something I’m not. I’m essentially that guy in the Joe Walsh song Ordinary Average Guy (With the exception of the bowling part). I think part of becoming a better blogger is developing a voice. My hope going forward is that I can further develop into the voice of your ordinary average Royals fan here, and as a sports fan at sportsdrenched.com. 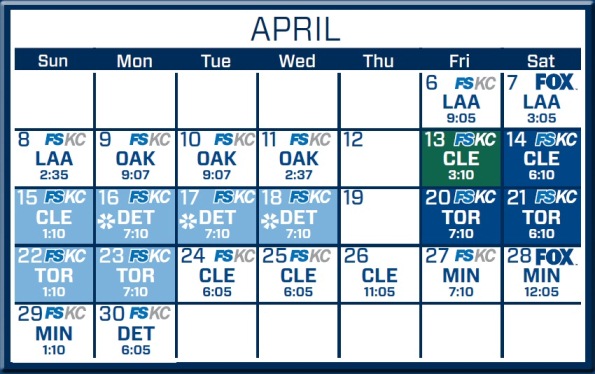 Now that I’ve got my Delilah episode out of the way it’s time to get to write about Royals baseball. This past week has been tough. Injuries to key players, confusing trades, southpaws getting shelled, and general spring training weirdness have put a dark cloud over the optimism that was displayed by Royals fans coming into camp. Not only that, I’m just tired of spring training. The novelty of spring baseball has worn off and I’m ready for some real games. Since I’m ready for real games I figured I’d take look at some real games on the schedule. I’ll keep the look confined to April.

The Royals’ April schedule features 23 games: There is a 10 game home stand sandwiched between two road trips. There are 13 divisional games. As you might have heard the Royals start with a west coast road trip. I like west coast road trips. All the games are later in the day which increases the likelihood that I get to watch them. I’m not thrilled about the Royals and Angels being the last two teams to start their season. However this means I’ll actually be able to pay attention to the opener, and that doesn’t happen very often. It should be noted that the first two games of the season will be televised on ESPN on Friday, and FOX on Saturday. This only matters if you live outside the Royals television market. It’s nice that the networks find the Royals that interesting. Of course, one Albert Pujols would have nothing to do with that.

I know games in April are not thought of as important over a 162 game schedule, but playoff spots are won and lost by one game. If this isn’t apparent after the last day of the season in 2011 I don’t know what is. To me there are two key series in the month of April. The opening series on the road against the Angels; April 6th-8th; and at home against the Tigers; April 16th-18th. Both of these teams are pre-season favorites to win their division. They will be excellent measuring sticks for this young Royals team. If the Royals go 3-3 over these 6 games I’ll consider it a positive development.

How will they do? I see a 3-3 opening road trip, 7-3 home stand, before going 3-4 on the second road trip. That adds up to a 13-10 April record. This team is expected to be around .500. You might say my glasses are shaded slightly blue. If the Royals do better than that, be excited. If they’re .500 they would be who we thought they were. If they’re worse than that? Such is spring in Royals Nation.