The four regions of the All Time Cardinals Team Tournament have pared their individual groups down to four teams, creating the Sweet Sixteen of this tournament.

The Musial Region is hosted on Pitchers Hit Eighth, who developed the idea for this tournament and invited us to join in.  We were joined by fellow UCB Team Blog Of The Year, Aaron Miles Fastball, who hosts the Gibson Region of the tournament.  Rounding out the group is the Godfather of the UCB himself, hosting the Smith Region over at C70 At The Bat.

The Buck region?  That’s right here on i70baseball and we are down to the last two rounds before the Final Four moves to the official UCB Site.  Head over to that site and learn how you can win an entire 2011 World Series DVD set while following along with the tournament.

There are two matches for you to decide today, and they promise to be some good ones.  Here’s a look at the Buck Region Bracket as it currently stands: 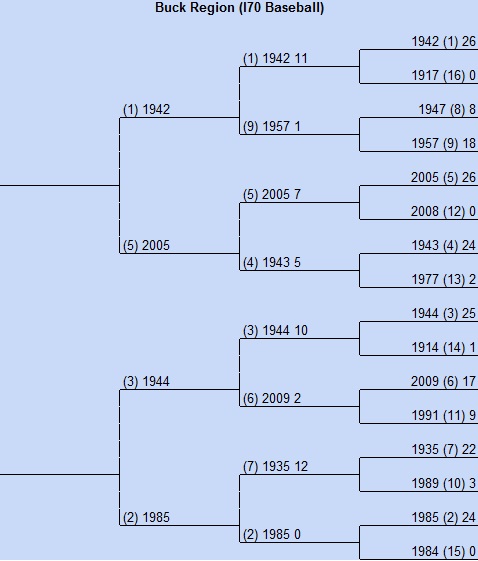 Our opening match-up features our Number One seed, and the Cardinals team that won more games than any other in history, the 1942 World Champions.

The team featured the top two finishers in the Most Valuable Player voting.  Enos Slaughter, in his final season before serving military service for three years, would finish second in the voting after leading the team in Home Runs (13), Batting Average (.318) and Runs Batted In (98).  The offensive presence was not enough for Slaughter to beat out Mort Cooper, however.  Cooper would post a 1.78 Earned Run Average, 22 wins, ten shutouts, and a 0.987 WHIP in route to the MVP Award.  Cooper’s success did not carry over into the post season, however, as he was roughed up in two starts against the mighty Yankees, taking the team’s only loss in the Fall Classic that year.

Up against the top seeded team is the only “underdog” left in the entire tournament.  While every bracket features their first through fourth seeds, the five seed in the Buck Region is trying to fit their foot into Cinderella’s glass slipper.  The 2005 Cardinals played their way to the National League Championship Series and creating a whole bevy of memories for fans before bowing out to the Astros.

Led by their superstar Albert Pujols, the league’s Most Valuable Player in 2005, the team was an offensive juggernaut.  Pujols would post a .330/.430/.609 slash line while hitting 41 home runs, driving in 117 runs and leading the league in runs scored with 129.  Backed by names like Jim Edmonds and Larry Walker and an injured Scott Rolen, the team was a new-century’s murder’s row.

The team was not without pitching, however, as ace of the staff Chris Carpenter would win 21 games, post a 2.83 Earned Run Average, seven complete games (leading the league) and 213 strikeouts, all good enough to bring home the Cy Young Award.  Carpenter was backed by Jeff Suppan and Mark Mulder, both winning 16 games each, and a strong bullpen led by Jason Isringhausen and his 39 saves.

The choice is yours.  Does the underachieving 2005 team (100-62) continue the quest for upsets?  The 1942 team carries the best regular season record in team history (106-48) and a World Championship, is that good enough to move on?  Vote right here:

The bottom branch of the Buck Region brought very little surprise.  The second and third seeds advanced the way most would expect and now face off for the right to compete for the Regional Title.  This game’s top seed is the number two seed of this bracket, the reason this site exists, the 1985 Cardinals.

You remember that team.  101 wins, Whitey-ball, speed on the base paths and heartbreak in the World Series.  The highest ranked non-championship team in the tournament, this team was responsible for creating a bevy of Cardinal fans.  The team built on speed had it’s bopper in Jack Clark, but it was the center fielder Willie McGee that would be the National League Most Valuable Player that year.  A .353 batting average, 82 runs batted in and 56 stolen bases will do that for a guy.  Combined with 216 hits and 114 runs scored, McGee was a big part of why this team went as far as they did before being derailed by the Kansas City Royals in seven games in the Fall Classic.

A pair of 21 game winners would finish second and fourth in the league’s Cy Young Award voting, but gave the Cardinals a one-two punch that was formidable all season long.  John Tudor would post a 1.93 Earned Run Average, 14 complete games, 10 shut outs, and strike out 169 hitters as the ace of the staff.  Meanwhile Joaquin Andujar would keep pace in wins while posting a 3.40 Earned Run Average, 10 complete games, 2 shutouts and strike out 112 in support.

The namesake has it’s work cut out for it against the 1944 Cardinals, however.  Holding the number three seed based solely off of their draft position in the layout of the tournament, this group was a virtual mirror image of the 1942 crew that sits as our number one selection.

The team would bounce back from it’s 1943 World Series loss to post 105 wins and another World Championship.  Stan Musial would continue his meteoric rise onto the scene in the 40’s with an impressive slash line of .347/.440/.549 and hit 51 doubles, 12 home runs, drive in 94 runs and finish fourth in the league Most Valuable Player voting.  The following season would see Musial spend a year in the Army fighting for his country, but 1944 he fought for his team and proved why he would later be called “The Man”.

Do the 1944 World Champions advance to face off for the Regional Title?  Can 1985 cause fans to continue to “Go Crazy, Folks!”?  It’s up to you, our fans.  Vote below for your favorite.

Share it with your friends, pile up the votes, it’s time to name the teams for the Regional Title game on the path to deciding the All Time Cardinal Team.