Drop by our friends at Pitchers Hit Eighth, C70 At The Bat, and Aaron Miles’ Fastball to vote in the Musial, Smith, and Gibson Regions of the tournament.  The turn out to this point has been outstanding and we move forward today with the opening of the second round of the tournament.  I-70 is the home of the Buck Region, and the bracket now looks like this: 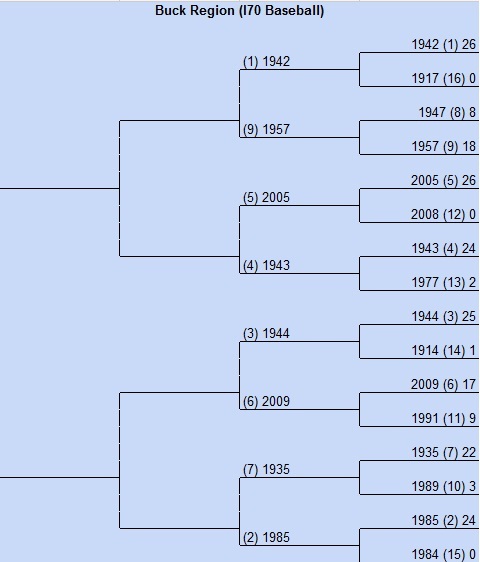 Which brings us to your participation.

Voting for this round closes Wednesday night at 8 p.m. Central Time.

It’s time to get the Buck Bracket down to four teams and we need your vote in the following four games:

The top seed in the bracket, the 1942 Cardinals, posted a shut-out in their opening match-up.  It is important to note that this is the most successful team in Cardinal history.  With 106 wins (most in franchise history) and a decisive 4 games to 1 victory over the mighty Yankees.  The 1942 team was the beginning of one of the few dynasties in Cardinals history, which would see the team play in four of five World Series and bring home three titles.  A young rookie named Stan Musial had joined the team and pitcher Mort Cooper would bring home a Most Valuable Player Award for his performance.

The 1957 Cardinals were the loan “upset” in our opening round in the Buck Region, knocking off the 1947 team placed just ahead of them in the seeding.  The team that year would finish in second place, watching the Milwaukee Braves represent the National League in the World Series.  A winning record of 87-67 would not be enough for an offensive heavy edition of the Birds-on-the-bat as Stan Musial would once again lead the team in production.

The fifth seed in our bracket, the 2005 Cardinals, breezed into the next round, and rightfully so.  A great team at a low-seed, the 2005 edition produced 100 wins before losing in heart-breaking fashion to the Houston Astros in the National League Championship Series.  That series produced memorable moments for many Cardinal fans despite ending prior to reaching the pinnacle of the game.  The team was so dominant that they would bring home a Cy Young Award for Chris Carpenter and a Most Valuable Player Award for Albert Pujols.

Our number four seed, however, is part of the dynasty that we discussed with our number one seed in the tournament.  If the 1942 Cardinals started the dynasty, the 1943 Cardinals were the only stumbling block.  They won 105 games, second most in franchise history and Stan Musial would bring home the Most Valuable Player Award.  They were dominant from wire to wire, until they reached the World Series.  The only team in the 1940’s run to not win a World Series, the team was very successful otherwise.  The match-up of two great teams that couldn’t win the World Series promises to be one of the best in this bracket.

The dynasty of the 1940’s continues with our fourth seed, the 1944 Cardinals.  Matching their previous year, the team would win 105 games and, this time, would not disappoint in the Fall Classic.  The second World Championship of the decade would find it’s way home to St. Louis as Stan Musial continued to become a household name.  The World Series would never leave St. Louis that year as the Cardinals would defeat the Browns four games to two.

The 2009 Cardinals were expected to be a force when they reached the playoffs after winning 91 games during the season.  Unfortunately, when they arrived at the National League Division Series, the team seemed over matched and out of place.  The Los Angeles Dodgers sent them home quickly and brought a disappointing end to another strong season under Tony LaRussa.

Our final game pits our number seven seed, 1935, against the number two seed.  The 1935 group is yet another promising team that did not play in the World Series.  With 96 wins, the team fell four games back of the league winner that year, the hated Chicago Cubs.  This team would see Dizzy Dean finish second for the Most Valuable Player Award, three spots in front of teammate Joe Medwick.

Our namesake here at i70baseball, the 1985 Cardinals, may be the emotional pick and one of the best, non-championship teams in our bracket.  A team built on speed, defense, and fundamentals, the 85 crew was lead by Willie McGee and his .353 batting average and two hurlers that would finish in the top five of the Cy Young voting – Joaquin Andujar (4) and John Tudor (2).

There you go, run and vote and share with all your friends.  Visit the other sties above to cast your votes in their brackets and help us decide who the greatest Cardinal team of all time is.

A bit of a teaser from Nick at Pitchers Hit Eighth today: Also, stay tuned to the United Cardinal Bloggers website later today for a fun contest you can participate in along with the Tourney!