8 Days: Until the Cactus League Opener

From this day forward any time “The Process’ is mentioned in one of my posts. Said post will proudly display this logo.

This week I’m going to focus on a player who I believe must blossom into All-Star caliber pitcher if “The Process” is going to get the Royals into the playoffs. I don’t mean a capable middle of the rotation innings eater. I’m talking about a Zack Greinke type, takes the ball every fifth day and you know the Royals have a better than even chance to win, ace pitcher. I am talking about Mike Montgomery.

The Royals drafted Mike Montgomery out of Hart High School in Newhall, CA with the 36th Pick in 2008 Amateur Draft. If you’ll recall that was the same draft Eric Hosmer was taken with the 3rd overall pick. A year ago I was really excited that the Royals had Montgomery in the farm system. Baseball America listed Montgomery as the #19 prospect on their Top 100 Prospects list. To add some shine to the varnish, Montgomery throws left handed. I was delighted to see Montgomery destroy the Cactus League last year. In April I attended the Futures Game at Kauffman Stadium. When I saw Montgomery pitch that day there was no doubt we would see him a Royals uniform by the All-Star Break. 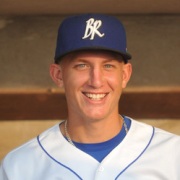 However, the season started and the reports out Omaha become troubling, and that major league debut for Montgomery never came. Instead it was Danny Duffy who was called up when Bruce Chen went down with an injury. I’m not up to speed on how to bring a pitcher through a minor league system. Maybe the Royals organization had Montgomery “working on something” last season. I’ve heard that reason given for a spring training with terrible statistics, and I believe that would be the case. There’s plenty of pitchers who had terrible statistics in spring training that went on to have excellent seasons. I have yet to hear about someone “working on something” for an entire season. Of course, established major leaguers have bad seasons so it’s reasonable to assume that prospects can have them too. They have less of a track record in which to base their success.

Last season does not mean Montgomery is a lost cause, far from it. This spring Baseball America has Montgomery listed as #23 in their Top 100 Prospects List. That’s still good company. Montgomery is expected to compete with several other young arms for the two remaining slots in the Royals rotation. Based who has options, and who doesn’t, I don’t expect Montgomery to break camp with the Royals. I hope he pitches well enough this spring to force the Royals hand and put him in the rotation coming out of camp. If that does not happen I’m sure Montgomery will be up at some point this season. At least I hope so. The Royals need their number one prospect to be dominant. If the Royals are going to win the division, they need their number one prospect to turn into an ace. Not just an ace of a team, but an ace on a playoff team.

One thought on “The Process player profile: Mike Montgomery”