9 Days: Until pitcher and catchers report to Spring Training.

23 Days: Until the start of the Cactus League.

We have reached the abyss in the sports world that is marked by the Super Bowl at the beginning and Spring Training at the end. There isn’t much going on in the sports world that I care about. No, I’m not real excited about Truck Day. It’s so bad that I watched an NBA game for .05 seconds. It almost like I’m injured. Like I need some sort of assistance to help me get through these few weeks known as The Sports Abyss. What I need is some crutches.

I think I’ve found them. These crutches come in the form of College Basketball. Living in Kansas you get weird looks when you tell people you would rather listen to a meaningless spring training game on the radio over watching the NCAA Tournament. I have done this numerous times. However, if the splintering of Royals Nation into their respective college camps doesn’t entertain you, you just don’t like sports. 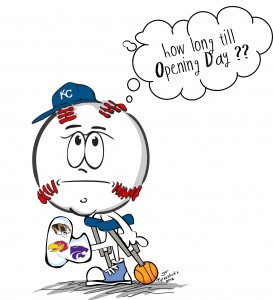 The picture above was created by my friend James Tyree. Earlier this week he got some of his work mentioned on HardballTalk. He’s a big Royals fan and you can expect more work from him in the future. Check out his graphics blog here

One thought on “Crutches”