It is Super Bowl Sunday.  This year on I-70 we will mark the end of the football season, which is subsequently the beginning of the baseball season, with guest posts from various writers.  The writers will provided with one subject to write about: Why Baseball Is Better Than Football.

What follows is a submission from Michael Clair of Old Time Family Baseball.

Space Oddity: Or Why Baseball is Superior to Football

If you were to bring a space alien without any previous human contact to a football game, he would quickly understand that men in one colored shirt are trying to get a ball to one side of the field while the men in the other colored shirt were trying to do the reverse. But baseball’s a weird game, a surprisingly popular cultural oddity. Baseball, unconcerned with linear storytelling, features one man throwing the ball to another man carrying a large stick, with eight other people wearing the same shirt as the thrower standing around. And sometimes the guy with the stick doesn’t do anything and other times he swings and if he hits the ball then the men standing around run after it and…you get the point.

Unlike football, baseball is not about hurling your strongest guys at each other and seeing who emerges from the pit. Football is all about aggression, while baseball is about patience and stillness suddenly breaking into moments of chaotic movement.  It lends itself to careful study and a thoughtful approach before all that proper preparation is lost to a double in the gap. It’s why players like Miguel Batista can get away with thinking about poetry while standing on the mound.

Since baseball’s rules are weird, it’s only natural that the players be bizarre as well. Tom Brady is considered a rags to riches story after being selected in the fourth round (to say nothing of his possible Expos career) but just look at his perfectly sculpted cheekbones which now grace Ugg Boots billboards and that story quickly falls apart.

But while baseball has plenty of physical specimens that could don spandex and fight crime, there are also your David Ecksteins with skin so translucent you could see through to his vital organs. Tim Lincecum just earned himself a $40 million contract and not only does his hair weigh as much as his body, but his pitching motion defies the known laws of physics. Sam Fuld became an overnight sensation last year as a 5’10” Jewish diabetic who graduated from Stanford. Last I checked, those kinds of players don’t make it to the NFL. And yes, teams want pitchers who can muscle the ball into the high-90s, but baseball also has a rich history of Niekros and Wakefields, men who spit in the face of conventional thought and the aging process by hurling up mid-60s knucklers that dance and dart and land anywhere except where they’re aimed.

When the players aren’t eccentric, they’re outright crazy. Mark Fidrych captivated the nation for talking to the baseball; Doc Ellis pitched a no-hitter while high on LSD; and Fritz Petersen and Mike Kekich traded families as members of the Yankees in the early 70s. But no one compares to Kevin “Touch Me, Touch Me” Rhomberg. 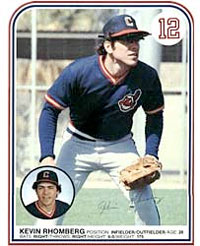 Christened as such by Mike “The Human Rain Delay” Hargrove (who earned his nickname for the time it took him to step to the plate), Rhomberg was compelled to touch back anyone who came into contact with him. Armed with this information, his Indians teammates would torment Rhomberg by finding ever unique ways of brushing against him. If Rhomberg was touched while using the bathroom stall, he would have to run around the clubhouse, tapping everyone just to be sure the offender was repaid. Once, the umpires had to tell the opposing Yankees team to stop touching Rhomberg because it was interfering with the game. Football, with its built-up machismo, would never have room for a player like Rhomberg.

In the end, it’s baseball’s mentality that lends it this quality. Football is all about that one big game, that “forget everything except Sunday” meme. Played every day through the warm, lazy summer months, baseball is too much like life to take this approach. The weirdos mix with the cool kids, success battles against the mathematical certainty of failure, and each game is shrugged off in deference to the endless forward march of time.