I have been struggling to find something in the baseball world to keep my attention. Yes, the Kansas City Royals signed some contracts to avoid arbitration. What kind of contract Alex Gordon gets remains to be seen. However, I view this stuff like changing the oil in your car. It needs to be done, yet it won’t increase performance, and will only help delay an inevitable decline.

We are 31 days from the pitchers and catchers reporting to camp, 36 days until the first full squad work-out, and 44 days until the Cactus League Opener. There isn’t a lot going on right now. However, I was at my parents’ house last Sunday when I ran across something that rekindled my baseball fire: my boyhood baseball card collection! I spent Sunday afternoon going through my collection, and it was like going back into time. The first time I pulled these cards out of their packages they came with a stick of bubble gum. I might have bought them on the way home after baseball practice. Maybe I bought them after riding my bike up the local convenience store where we would play Super Mario Brothers on an arcade game. I probably received baseball cards for a random birthday. Baseball was my favorite sport growing up, and collecting baseball cards was an appropriate outlet. 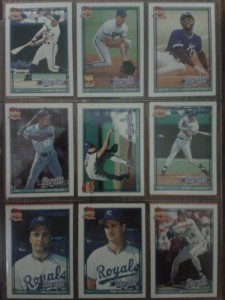 For one afternoon in January while the NFL playoffs were on the television, baseball became innocent again. When I was collecting baseball cards I didn’t know about payrolls, collective bargaining agreements, steroids, gambling, identity theft, or all the rumors about a player’s off the field deeds or miss-deeds. During this time I’m not sure if this information was public or I was sheltered from it. Either way, it seemed like a simpler time in the baseball world.

When going through the collection I studied the pictures a lot more closely than when I was a kid. Kauffman Stadium used to have orange seats, rock hard Astroturf, and dirt cutouts for the bases. It was Royals Stadium back then. I tried to tell from the shadows and angle of the sun if the picture was taken in spring training or in August. My favorite pictures were action shots, not the scripted poses.

I’m not sure how many baseball cards I have. I can tell you I only have one complete set: 1991 Upper Deck. That set is probably my favorite. But I did not buy that set when I was a kid. I bought the complete set as an adult when I was at an antique store with my Mother-In-Law. I bought it for $10. The store owners didn’t know what they had, and that was post internet proliferation. The closest I came to acquiring a complete set through buying individual packs was 1989 Topps, and 1991 Fleer. I always got a thrill out of opening a pack of cards because you never knew who you were going to get. Sometimes I got a Bo Jackson, other times I got a Rance Mulliniks, of which I already had three. Sometimes I bought “Jumbo Packs”. Mostly, my collection was built one pack at a time with allowance money.

That got me thinking. Do they still sell baseball cards? They do, Topps signed an exclusive agreement with MLB in 2009. I’ve walked into a few convenient stores this week to see if they still sold baseball cards. I have yet to find one that does. So far, Wal-Mart and hobby shops are the only places I have found them. I bought two packs of 2011 Topps the other night. $2 gets you ten cards these days. A long way from $.69 for 16 cards back in The Day. I got a Tim Collins rookie card for my trouble. Royals’ fans can only hope that someday that card is worth more than the $2 I paid for the pack. I suppose I could just order the entire 2011 Topps complete set. It would be more economical to do that. But economical and fun don’t always go together. Maybe I’ll pick up a few more packs between now and spring training.